An upcoming meeting between Port Edward and Prince Rupert Council members  will no doubt be held behind closed doors, but if Prince Rupert City Council is thinking big, booking the Civic Centre Arena for a proposed Council to Council engagement session with Port Edward Council, might be one revenue generating plan that will pay off in great numbers.

Such would be the anticipation of the residents of the North Coast, that many would no doubt be willing to pay to sit in to watch what could be a most fascinating discussion. Interested no doubt, in seeing how the District of Port Edward is going to respond to a pair of revenue sharing concerns that the City of Prince Rupert has in mind for a discussion with their neighbours.

Monday night City Council outlined its plan of engagement to introduce some sure to be contentious discussion topics for the District, a pair of issues that perhaps highlight a growing split in the region when it comes to shared burdens and anticipations when it comes to potential revenue streams.

During Monday's council session, council members received a report from the City's Financial Officer Corrine Bomben, the document providing some history when it came to the creation of the Ridley Island Tax Agreement, a revenue sharing agreement that has been in place since 1980, going  back to when the City of Prince Rupert expanded its boundaries to include Ridley Island.

At that time the Province put in place the sharing percentages for revenues from Ridley, which saw Prince Rupert receive 80 percent and 20 percent directed to Port Edward.

Since 1984, subsequent attempts by the City of Prince Rupert to seek a re-opening of the agreement have been politely turned aside by the District, which has shown no interest in changing the existing formula.

A sample of their replies can be found below, in a letter from Port Edward from October of 2014. A document which makes it pretty clear where the District stands on the issue. (click to expand) 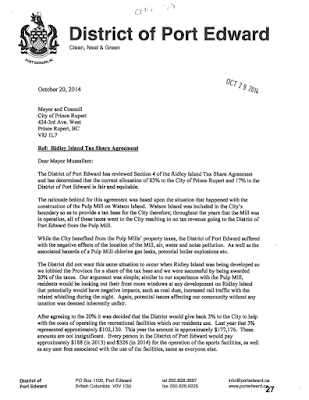 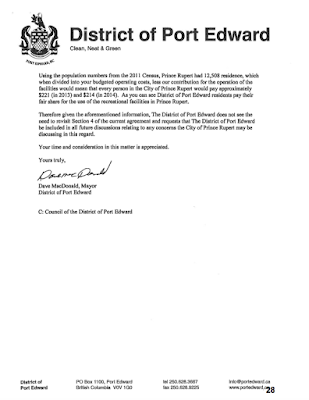 As part of her presentation, the City's Financial Officer provided a breakdown for Council that outlined the amount of money that has been transferred to Port Edward over the last six years as part of the agreement, with 700,000 dollars anticipated to be the amount that will be directed to Port Edward this year.

The Tax Agreement transfers have provided for an amount that the City states accounts for 52 per cent of the taxes collected in the District of Port Edward.


You can examine Ms. Bomben's full report from Monday's Agenda package it can be found from pages 25 to 28.

Following her review, Councillor Mirau who had requested the report that was prepared for Council inquired as to whether the City had been involved any discussions on tax sharing opportunities related to Lelu Island.

Ms. Bomben noted that the City had not been invited to participate in those discussions that provided Port Edward with a 25 year agreement on property taxes.

At that point, Council members lined up to list their grievances with the current arrangement, highlighting how in their opinion the current situation is unfair to the City of Prince Rupert and its taxpayers, among some of the thoughts from Monday Night:

"I think we all understand why Port Ed feels the way that they do and that they don't want to reopen this, and I'm all for being a good neighbour but when we're talking about this arrangement being over 50 percent of the tax revenue I definitely think it warrants further discussion but I do want to respect Mayor Dave MacDonald's request to be at the table ... rather than  us trying to beat the subject to death I would rather request that we invite the Port Ed Council to meet with us Council to Council ... the agreement to me seems to be outdated and isn't serving the City of Prince Rupert's interest and I think it warrants further discussion"    -- Councillor Blair Mirau

"If we reopen this, then I think we should be sitting down with them and discussing a tax sharing situation on Lelu if it goes ahead"  -- Councillor Barry Cunningham

"It seems to be a very one sided arrangement, that we are transferring quite a lot of revenue over , yet in terms of shared services back that doesn't seem to be necessarily the case and I think that needs to be part of the discussion as well. It's time now for us to look at the fact, that when this deal was negotiated we had a mill that was supporting this community, we had Ridley Island that was just about to be developed, and now we don't have a mill, which costs the city 90,000 a month for how long, long time. And we don't have these extra developments at the moment.

Yet one opportunity comes on Port Ed's doorstep PNW and that is not a reciprocal arrangement back in terms of us receiving some sort of benefits from that development ... As Councillor Mirau is suggesting it's time for a frank discussion, it's 2016 now the world has changed, the time has changed and it's time for us to really address the fact that we're not in a financial position anymore to be transferring that kind of revenue over to Port Edward. "     -- Mayor Lee Brain

"Basically this is a neighbourhood that is ten minutes away that basically doesn't have to contribute to any of the things that a municipality needs, they don't need to build a gym, or a civic centre, or an arena or any of the stuff, because they already have ours to use essentially for free.  Same thing with the garbage dump, the ferry to the airport, the only fees they pay are those of a user fee ...

So I feel this agreement is very outdated and definitely needs to be talked about, they can brag about having the lowest taxes in the province, because we give them over half of their taxes, so it's pretty easy to keep it that way I can understand why they wouldn't want to discuss it .. the people of Prince Rupert need to know that this is happening so they can understand why we are paying them 700,000 dollars a year"  -- Councillor Wade Niesh

Of course Port Edward Council has concerns of their own with the nature of the City's approach to bilateral consultations, last year they expressed their dis-satisfaction with the City and its increase of rates to use the landfill site on the Ridley Island Access Road.  An irritant that has left the District to give some thought to developing its own landfill site, a plan which may get dusted off with Prince Rupert's current theme of discussion.

Previous to that, Port Edward cast a suspicious eye over the City of Prince Rupert's ambitious plan to absorb a large portion of the region into the municipal boundary, a plan which eventually was scaled back to just the annexation of the Lot 444 lands adjacent to Tuck Inlet.

As for the proposed quest for a share of any potential LNG revenue from the Lelu Island site, that concept may prove to be a larger challenge for the City than even the Tax Agreement prospects might provide for.

Port Edward Council will most likely find Prince Rupert's concerns and their desire for a share of the potential bounty as a somewhat ironic request. Particularly considering the less than hearty endorsement of the project  that has been found from the Council chamber on Third Avenue West.

In the early days of LNG development then Councillor Rice and current Councillor Thorkelson left no doubt in 2012 as to their opposition to the Pacific NorthWest LNG project, using City Council sessions to share of their concerns over the proposed development.

More recently, Council again kept a rather  cautious tone on the topic of Lelu Island, with Mayor Brain offering up the observation to TV7 in October that Prince Rupert Council would remain neutral on the topic of the proposed development.

Those are two themes we imagine that the District of Port Edward might bring to the attention of their counterparts from Prince Rupert at that Council to Council session.

Budget time always seems to make for a timely moment for City Council to highlight some of their financial concerns, as they try to craft their financial blue print for the year ahead.

In past years it's been the Port of Prince Rupert hat has played the role of Council's revenue woes bogeyman, with previous councils using the PILT process and the province's taxation regimen as an indication of the unfairness of the current financial arrangements.

This year it would seem that the Port is going to be able to sit out that dance, instead the District of Port Edward is the partner that finds itself on the City of Prince Rupert's dance card for 2016.

During his campaign for office and at the start of his term on Council, Mayor Brain indicated a need for better engagement with the city's neighbours.  Suggesting a preference for inspired leadership that looks to build partnerships and a move way from division.

The response from the District of Port Edward toward the twin themes from Prince Rupert should make for an interesting look at how the Mayor and City Council's current approach to find common ground with area communities and partners is going to work out.

You can review the full discussion from Council through Video archive it starts at the 20 minute mark.