According some reports out of the financial press on Tuesday, the final steps related to the proposed LNG terminal development at Lelu Island are going to be handed over to the Prime Minister and Cabinet for a final decision.

BloombergBusiness reported on Tuesday that Environment and Climate Change Minister Catherine McKenna will refer a verdict on the proposed development to the Cabinet, rather than approving the 36 billion dollar project, with conditions.

The full Bloomberg article can be reviewed here. 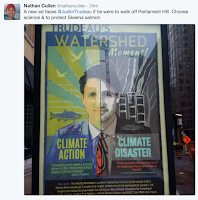 How the Federal Liberals decide the fate of the proposed development is seen by many as a key indicator as to how they intend to move forward on their environmental plan and their program of enhanced consultation with First Nations.

Pressure is being applied towards the Federal cabinet from a number of directions as they move forward with their review of the recently completed environmental assessment process.

Skeena-Bulkley Valley NDP MP Nathan Cullen took to his twitter feed on Tuesday to make note of a billboard that has sprung up within eyesight of Parliament Hill.

The message on the billboard calls the issue Trudeau's Watershed Moment and calls on Canadians to become climate Champions and to urge the Liberals to reject the Pacific NorthWest LNG project.

Industry observers note that any kind of further delay on the proposed development could give Petronas, the parent company of Pacific NorthWest LNG cause to abandon the project.

Earlier this month, Petronas issued a statement on the status of  the review for the project:

Currently, the Canadian environmental impact assessment process for the PNW LNG project is still ongoing, following which a final report will be produced by the relevant agency to be submitted to the Government of Canada for approval.

PETRONAS, together with the project shareholders, will review the said final report and evaluate conditions attached to the report to further determine their impact on the overall cost structure and schedule of the project.

The outcome, reviewed together with the LNG market outlook and overall project commerciality, will be used to develop the proposal for an investment decision to be considered by the PNW LNG shareholders.

There has to this point been no comment released by either Petronas or Pacific NorthWest LNG related to the reports out of Ottawa from yesterday.

While events run their course in the nation's capital, British Columbia's Finance Minister is on the road to explore further trade  opportunities. With Michael de Jong travelling to India and Malaysia  for a number of meetings with government and industry officials.

Included in his itinerary is a stop in Kuala Lumpur where the Minister will explore opportunities to further economic relations with Malaysia.

Among his destinations while there, is the head office for Petronas, and a meeting with representatives of the Malaysian state owned energy company to discuss the progress to this point and next steps to establish the Pacific NorthWest LNG facility near Port Edward,

You can review our full archive of items related to the proposed LNG development from our archive page here.

Email ThisBlogThis!Share to TwitterShare to FacebookShare to Pinterest
Labels: Reports that Federal Cabinet to decide on Pacific NorthWest project