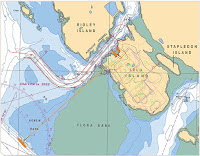 Friday is the final day for public comment on the Canadian Environmental Assessment Agencies Draft Report on the Pacific NorthWest LNG project proposed for Lelu island, bringing to an end the lengthy engagement process for the North Coast on one of the most talked about developments in decades for the region.

Once Friday's deadline passes the Report and the range of commentary that has been collected about it will all be forwarded to the Federal Environment Minister Catherine McKenna for her review.

However, by the time the report and comments make their way to Ottawa, a letter signed by more than 130 scientists and academics in opposition to what they call a scientifically flawed report will have already been delivered to her office.

The contents of that letter were released today, the latest contribution to a debate that has raged across the province over the last few years.

Two of the nine pages of the document are dedicated to the concerns of the scientists, with the remaining seven pages left for signatures and citations, dated March 9th, it lists five areas of concern.

Misrepresentation of the importance of the project area to fish populations, especially salmon

Assuming lack of information equates to lack of risks

Disregard for science that was not funded by the proponent

Inadequate consideration of multiple project impacts and their cumulative effects

As an emphasis point, the letter notes that: the CEAA draft report represents a flawed assessment of the environmental risks of the PNW LNG proposal. While we are not decision-makers, we can assess when decisions would be made based on false premises. This is one of those instances. We urge you to reject this draft report.

The group issued a media release today to outline their position and also created a website that outlines more background on the issue.

The Globe and Mail was the first of the major media organizations to report on the letter, providing a full overview of the concerns from the scientists, as well as offering more background on the nature of the Draft Report, as well as to outline the confidence that the CEAA has expressed in its process.

Included in the Globe's work is the review of the current comment period, which the Globe notes has received 10,000 comments since the February 10th period for contributions was opened to the public.

Those totals provide an indication as to the how much the project has resonated across the region both on the pro development and stop development side of the debate.

Copies of the letter from the scientists, many of whom were involved in a report delivered by Lax Kw'alaams on the project back in October of 2014 were also addressed to Prime Minister Justin Trudeau and three other cabinet ministers.

The Federal Environment Minister is to review the Pacific NorthWest LNG proposal and is expected to deliver a decision sometime around March 22nd.

Among the co-signers to the letter is the North Coast based Oceanographer Barb Faggetter, who has been a strong opponent of the site selection from day one. She has been involved through the review process for the project, speaking frequently on the topic of the proposed development and its potential impact on the Flora Bank region of the North Coast.

Ms. Faggetter is also the resident scientist with the City of Prince Rupert and has provided input for the City when it comes to the proposed Tuck Inlet LNG project proposed by Exxon-Mobil.

Groups in the Northwest such as the Skeena Wild Conservation Trust and Friends of Wild Salmon  to  name a few, have been busy marshaling their forces.

Those groups have been active in urging residents of the region to make their opinions known,  by filing a response as part of the comment process, or to call the Environment Minister to register their concerns.

A full overview of the process related to the Pacific NorthWest LNG proposal can be found on our archive page here.

A look at some of the media notes related to the letter to the Environment Minister can be found below:

Email ThisBlogThis!Share to TwitterShare to FacebookShare to Pinterest
Labels: Scientists and Academics outline concerns over CEAA report on Lelu Island