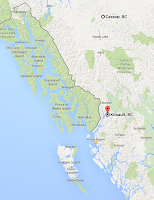 With the 2016 tourism season just over the horizon, British Columbia Magazine is offering up a unique tour of the provinces, offering up a couple of Northwest haunts for their listing of the Top Ten Ghost Towns forgotten by time.

Kitsault at the head of Alice Arm gets a nod from British Columbia Magazine, which notes the history of the community dating back to 1918 and how mining operations dictated the successes and failures for the town.

The other community from the Northwest that may find an increase in visitors this summer is Cassiar, tucked away north of Dease Lake, like Kitsault, mining was its main claim to fame. It was established in 1952 and was closed in 1992.  A short rebirth followed in 1999, with a fire on Christmas Day of 2000 burning down the mill which was doing reclamation work.

You can review the two Northwest entries in the list of ten BC ghost towns here.

It's not the first time that the two communities have been mentioned as part of a list of ghost towns in the province.

Globe BC featured Kitsault as part of its Ghost Town Mysteries series in 2014.

Not surprisingly, the comments section of the BC Magazine article is becoming an arguments page, with some sharing their favourite BC ghost towns, making their case for why their choice should have taken the place of one of the ten listed
Posted by . at 8:30 AM

Email ThisBlogThis!Share to TwitterShare to FacebookShare to Pinterest
Labels: Ghost Towns of BC, Kitsault and Cassiar