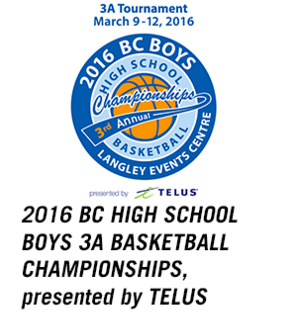 The Charles Hays Rainmakers hosting a number four seeding and a number of years of tournament experience now part of their history, will be looking to book a ticket for a return to Championship Saturday.

Wednesday evening marks their starting point at Provincials, as the Makers' take to the Langley Entertainment Centre courts in tournament action against their opening night opponent the Abbotsford Panthers.

With the goal of a Provincials banner in mind, the Rainmakers face some strong competition this year, with the AAA bracket considered to be one of the hardest paths to a championship, with many a potential upset anticipated along the way.

For the Rainmakers a quick scan of the other fifteen competitors will find a mix of familiar teams and some new arrivals, the latter perhaps more dangerous through their mystery, than those the Rainmakers have faced in previous years.

For 2016 nine teams including the Rainmakers are making a return trip to Langley for this years championship, with seven teams joining the mix for 2016 looking to stake their claim among the veteran squads as a Provincial powerhouse.

The Pay Per View log on page can be found here.
Viewing rates range from $8.50 per day or the full event pass for $24.00

As well, more info on the AAA Showcase can be found on  the Tournament twitter feed.


Rosters of the sixteen teams participating in this years Provincial tournament can be found below:

Below find our Results Page as Tournament week continues.

For more information on the Rainmakers at Provincials keep the CHSS Sports Twitter feed in mind, where updates, photos and other tournament news can be reviewed.

Our archive of notes on the 2015-16 Rainmaker season can be found here.

Media notes, videos and features on the AAA Provincial Tournament will be posted below, as they become available (check back frequently for updates)

Note: Rainmaker related items from the NCR will be highlighted in Green