Close contests marked much of the Rainmakers tournament week at Provincials

The final scores in two of the four Tournament games may have given victory by the slimmest of margins to the Charles Hays Rainmakers opponents in Langley.  But despite the early setbacks, the level of compete from the Prince Rupert squad remained strong to the final whistle of Saturday's play, even after they had been relegated to the consolation round at the AAA Senior Boys tournament.

The Rainmakers week at Provincials started on Wednesday with a last second defeat as highly touted Lower mainland prospect Chase Claypool drained a last gasp shot to secure victory for the Abbostford Pirates, a loss which shifted the Rainmakers focus to the consolation round.

The Friday game not surprisingly delivered the largest margin for the opposition, the disappointment perhaps of not moving into the championship round still on the players minds, at they fell to the Nanaimo Islanders by a ten point difference in their first consolation round match up.

Friday saw a tough minded Rainmaker squad keep pace with LV Rogers of Nelson with the Bombers pulling ahead towards the end of play to secure the 81 to 74 victory.

Saturday offered up another back and forth match up to bring the tournament to an end with a one point difference standing between the Rainmakers and the the Matthew McNair Marlins, with the Marlins claiming a 77 to 76 victory over Charles Hays.

With their tournament completed, the Rainmakers became spectators for the Grand Finale of Tournament week, which featured an all Lower Mainland final, as Southridge   from Surrey defeated Steveston-London out of Richmond, by a score of 78-71 to claim the AAA Championship for 2016.

As they handed out the awards to bring this years tournament to an end, one Rainmaker was recognized for his work on the court over the four days of tournament play, with Justin McChesney selected to the Second Team All Star roster for 2016.

He received his Second Team award from a former Prince Rupert player, as John Olsen a Rainmaker All Star in 1960, 1961 and 1962 greeted the all stars on the stage. 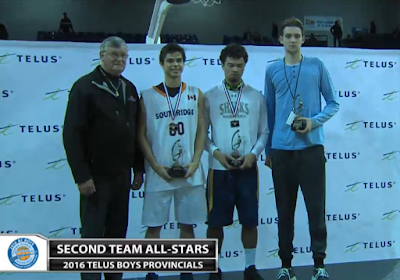 McChesney accounted for large portions of the Rainmaker scoring in all four games of tournament week, with 18 points in Game One and another 18 in the second game of Thursday.

He and the Rainmakers then turned on the offence for the final two games of tournament week, picking up 40 points against LV Rogers on Friday and 36 points on Saturday when the Rainmakers took on Matthew McNair.

As well as his all star selection, a Telus Basketball scholarship was awarded to the Rainmaker for his academic and sports achievements this year.

The Northwest received a second Telus Basketball scholarship, as Trent Monkman was awarded one for his work with Smithers this season.

You can review some of the background to this years tournament from our archive page, which features a look at how the tournament was covered by media outlets from across British Columbia, over the course of the tournament run up and days of competition.

More notes on the Rainmakers can be found on the CHSS Twitter feed or from our collection of items found on our Rainmaker Archive page.

Email ThisBlogThis!Share to TwitterShare to FacebookShare to Pinterest
Labels: AAA Provincial Wrap up 2016