An early morning residential fire on the Centre-West side of the city has tragically claimed the life of a local resident.

The Prince Rupert RCMP outlined the nature of the Thursday morning incident, having responded to a request from Prince Rupert Fire Rescue to attend to the scene, initially to assist with traffic control.

The fire took place in the 200 block of Sixth Avenue West and was reported to the Fire Department at 3 AM and continued to burn through the early morning hours.

Upon their arrival on the scene, RCMP member observed medical services personnel performing CPR on a 59 year old woman associated with the residence. Despite the work of those on the scene, the woman was pronounced deceased at the scene.

The cause of the fire is currently under investigation and is in its early stages. 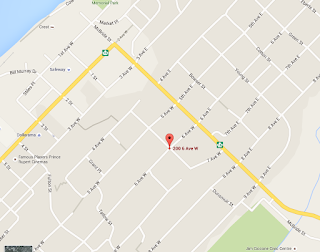 The Prince Rupert Fire Rescue Department was still at the Sixth West location watching for hot spots into the noon  hour, while the RCMP are also still on site, with traffic through the area limited to one lane only.

No further information will be released while the investigation continues.

You can review the full information release from the RCMP here.

More items related to the early morning fire and other notes on Emergency Service responses can be found on our archive page.
Posted by . at 1:27 PM