A final chance for parents and interested residents of the region to share some thoughts on the School District 52 Budget process comes up tonight, as SD52 hosts a Consultation session in the Multi Purpose Room of Charles Hays Secondary School.

The session is to take place at 7 PM this evening at the school on Prince Rupert Boulevard marks the latest of consultation meetings hosted by the School District as it tries to put the final touches on its Budget process for 2016.

With a projected budget shortfall that will require cuts of over 1 million dollars or four percent of the overall budget, School District officials will turn to the public for their feedback on some of the key issues facing the District in the year ahead.

Through February the School District hosted an online survey to allow for more communication from residents of the region, while the previous consultation sessions at Charles Hays provided some guidance for officials to consider as they moved through the budget process.

Transportation concerns appeared to be the early issue of note as the School District focused on a range of options when it comes to the budget issues, with one third of the questions from the online survey directed towards that theme.

Parents, Guardians and concerned citizens of the region can offer up more of their concerns tonight, with Administrative and Operational issues perhaps an area for spending reductions that could be part of the discussion this evening as well. 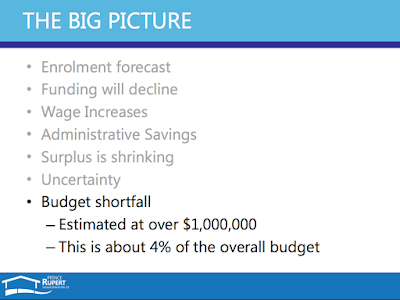 School District trustees are expected to submit their Final Budget proposal for approval at the April 12 Board meeting.

A look at some of the Budget presentation material from January provides a glimpse at some of the factors that SD52 officials and trustees have to weigh as they work towards delivering that budget next month.

Some of our previous notes on the 2016 consultation process can be found below:

For more items related to Education on the North Coast see our archive page here.
Posted by . at 9:45 AM