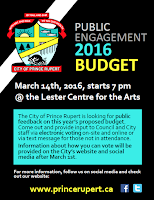 One of two chances for the public to offer constructive Budget making advice to the city's elected officials comes up tonight as, Prince Rupert Council hosts a Public Budget Forum at the Lester Centre.

The public session which gets underway at 7 PM, will also be broadcast live on CityWest Cable 10 and streamed through the City's Live Council link from the City website.

To get a better understanding as to some of the issues that Council is dealing with in 2016, a look back to a key Council session of February could provide a good tutorial for tonight's Public Budget Forum.

During the course of the February 22nd Council session, the City's Financial Officer Corinne Bomben provided a review of the Budget Process for 2016 and what City Council would be considering as they work on this years Financial plan.

We outlined some of her talking points from that meeting in our blog item from February 24th, which you can review here.

The documentation that accompanied her presentation to Council can be found from the Agenda Package from the February 22nd meeting, it can be reviewed from pages 7 to 14.

As well, the full presentation, complete with charts and other background material can be viewed below, taken from the City's Video Archive, Ms. Bomben's presentation starts at the thirty seven minute point.

One item that residents may hear more about tonight is a recently raised concern at City Council over the nature of the agreement with Port Edward when it comes to taxation through the Ridley Island Tax Agreement between the two communities.

At the March 7th Council session, Council members appeared to be setting that issue as one of its major concerns as they prepare to address budget pressures for 2016 and how they would be seeking a better arrangement with the neighbouring community.

As for the process of tonight's Public Forum the format will be fairly easy to follow, the session will get underway with comments from the Mayor, followed by a presentation from the City's Chief Financial Officer.

Instructions on how the Voting process will work will then be provided, followed by the opening of the Public Comment Period.

The City will also be conducting live polling on a pair of questions for residents to offer up their thoughts on, making use of an online polling website or by way of Sending a text message to CITYOFPR to 37607.

The two questions that the City has selected to ask residents tonight are:

1) The City has an extremely large infrastructure deficit. Do you agree the City needs to make asset renewal a priority in this and future budgets?

2) Do you agree with the City’s recommendation in the 2016 budget to set aside funds into asset renewal reserves?

Of course, that doesn't mean that residents in attendance at the Lester Centre can't pose their own questions of the City's elected officials as part of the public comment portion of the evening, seeking out information on issues that they may have some concerns or interest in.

Among some possible topics that we may hear about tonight could be on the topic of how the City is making use of the Legacy Fund and whether taxpayers agree with the direction and allocation of money that City Council has provided for that fund of revenue received from Lot 444 interest.

The accelerated pace of hirings with the City over the last year could perhaps be something that Council members could share some thoughts on, considering how Council has in recent months outlined how the City is still struggling with its financial resources and how they allocate them.

At the March 7th session of Council, during the course of a discussion on seeking a better deal out of the Ridley Island Tax Agreement, Mayor Brain noted that the City is spending 90,000 dollars a month on Watson Island issues, that reminder may offer up an opportunity for the City to outline what progress they are making on the current legal process related to the industrial site and if the situation is soon to be resolved.   In May of 2015, Mayor Brain outlined for the CBC's Carolina de Ryk that it was anticipated that the Watson Island situation was soon to be addressed. However, as the Mayor indicated last week, it would appear that to this point, the financial concerns related to Watson Island do not seem to be behind the city just yet.

Recent changes to Recreation Fees for use of the City's Recreational facilities may also provide for some discussion from residents, the Public forum would be one opportunity for those that use the facility on a regular basis to provide some feedback on the path the City chose to take in 2016.

The nature of the CityWest dividend and the City's oversight when it comes to its investment could also make for an interesting topic for residents to seek more information about. With the city owned communications company still apparently holding to the pattern of delivery of around 400,000 dollars for a dividend payment, a far cry from the not so distant past when those dividends at times topped the 1 million dollar mark.

Residents may wish to seek out some background on the increase to City services rates that are coming due at the end of March, as well as the seek out more background on the proposed increase of two percent to the mill rate for this year, designed to provide for the reserves and future capital replacement issues.

Those in attendance may also have questions of council when it comes to the nature of the City's allocation of Community Grants, at topic which has been in the news in recent months, especially with word that the City had reduced the grant allocation for the public library.

That Library grant funding may be one area where a change from the original financial plan may be in the offing. On Saturday, through his Facebook page Mayor Brain noted that Council will reveal a special announcement regarding the Library at tonight's meeting. 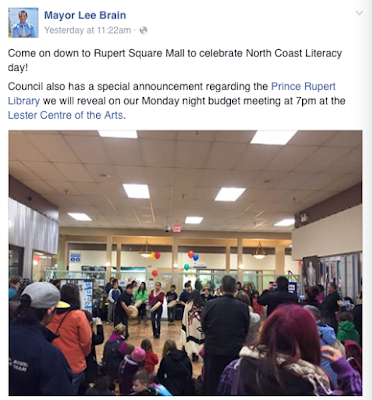 The final opportunity for public comment on the Budget process will come up next week, as part of the regular February 21st Council session.

A larger overview of Prince Rupert City Council discussion topics can be found on our Council Archive page here.