It's an event that seems to have suffered from a drop off in interest over the last few years, however organizers of Earth Hour are perhaps a bit more hopeful that this years event will be the bounce back year for the annual evening dedicated to energy consumption.

The Earth hour project proved to be quite popular in its early days, though whether through a lack of interest in the message, or weariness on the part of those the program was targeting, the participation levels became stagnant and in recent years those declining numbers have provided for some concerns over momentum for the project.

As recently as 2012 Prince Rupert could be found in the middle of the pack of participating communities, and while results have varied in recent years, last year Prince Rupert seemed to be ahead of most communities in its dedication to the energy saving hour.

Something which puts the community ahead of many others in British Columbia that have seen interest in the project drop off.

This year the observation of the hour of energy consumption has received a shout out from the Federal Minister of the Environment and Climate Change Catherine McKenna who took to twitter today to remind Canadians of Saturday's event. 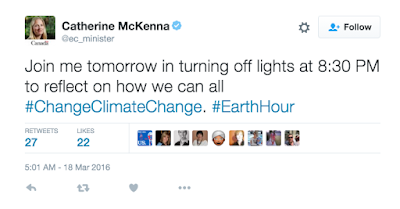 The Province of British Columbia has also residents of the province to participate in t his Saturday's event, offering up some background on last years observance.

This year organizers will look to see those participation number increase during the 8:30 - 9:30 hour on Saturday night, when Canadians join residents in over 170 countries in Earth Hour observance.

Earth Hour is organized in Canada through the World Wildlife Foundation, with BC Hydro once again participating in this years efforts offering residents of the province a chance to track their energy savings online and a few hints on how to enjoy the hour.

The International campaign can be followed here.

As well, much like in recent years, the #EarthHour twitter feed will be home for conversation and updates on this years event.
Posted by . at 11:48 AM