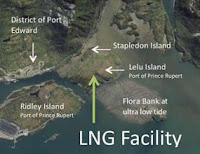 A Terrace rally that was held this week by those looking to send a message to the Federal Government to move forward on the Pacific NorthWest LNG project has captured the attention and provided for a comment from one of the largest opponents to that project.

SkeenaWild which has been among the leadership of those looking to stop the development of Lelu Island as an LNG terminal, has offered up a response to this weeks rally which saw a number of Northwest residents gather across from Terrace City Hall to call for the project's approval.

In their statement the environmental organization notes that the current environmental process is broken and once again calls attention to its concerns over the proposed location for the Pacific NorthWest LNG project.

"Petronas' LNG proposal is the poster child of how the development process is broken. The proponent was courted by an agency of the federal government, the Prince Rupert Port Authority, to place a massive industrial facility overtop of some of the most important and sensitive salmon habitat in Canada. This project was destined to fail right from the start."

SkeenaWild also noted the twin themes of the Federal Government's commitment towards the environment and greater engagement with First Nations on environmental review issues.

"The current federal government received a strong mandate to address climate change, fix the current environmental review processes and rebuild the relationship with First Nations. Every shred of evidence confirms current processes do not result in positive investment decisions, or social license. And usually end up in court". "While we couldn't agree more that economic opportunity is important, it bears pointing out that the one time a First Nation community, Lax Kw'alaams, was fully and openly consulted on the Petronas LNG project, and where the science from all perspectives was presented in an open forum, the community almost unanimously rejected the Lelu Island project, as well as 1.15 Billion dollars"

SkeenaWild added that they share the concerns about Northern British Columbia's economy and called for an open and civil conversation across the region on these issues.

The full statement from SkeenaWild can be reviewed here.

The environmental review process for the Pacific NorthWest LNG project is now in the hands of Environment Minister Catherine McKenna, reports out of Ottawa this week suggest that she will be handing the final decision over to the full cabinet, though no timeline for when that decision will be announced has been released as of yet.

More background on the proposed LNG Terminal at Lelu Island can be found on our archive page.