Saturday's announcement of a ninety day extension of the Environmental Assessment period for the Pacific NorthWest LNG project has led to the dispatch of a number of provincial officials to Ottawa to try and lend a helpful hand in moving the process along quickly towards a final decision by the Federal Government.

As we noted on the blog Saturday, the surprising latest twist in the timeline towards a decision on the project was delivered on Saturday afternoon by the CEAA, announcing that the Federal Environment Minister Catherine McKenna had granted their request for the three month extension to the Assessment process.

LNG Minister Rich Coleman took to his twitter feed on Monday to note that Senior officials from British Columbia were working with the Federal government to overcome the delay, with the province still hopeful of a positive final outcome for the much anticipated LNG project proposed for Lelu Island.

Coleman noted the economic impact that the project would have on the province, the job creation opportunities and the nature of some of the consultation that has taken place through the process related to the Pacific NorthWest LNG proposal. 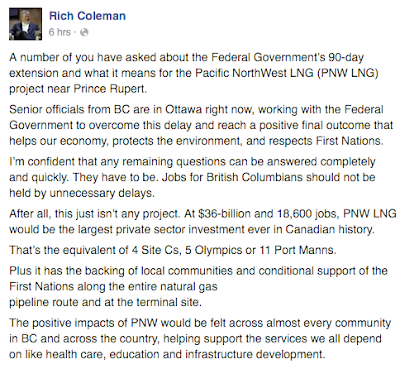 The LNG Minister is not the only one engaged in the LNG file this week.

British Columbia's Finance Minister has been on a tour of Asia during the course of the last week, with stops in India and Malaysia on his agenda for his travels. Included in his plans was meeting with Petronas officials to discuss the province's partnership with the energy company on its B. C.  plans.

No updates have been provided as of yet by the Provincial government on those discussions.

The B C Liberal government may have good reason to express its concerns when it comes to any further delays to the approval process.

As the Pacific NorthWest project heads into its ninety day extension, reports coming out of Asia suggest that the window of opportunity may be slowly closing on the province's ambitious plan for development of natural gas resources.

For a wider overview of the proposed Pacific NorthWest LNG project see our archive page here.

Email ThisBlogThis!Share to TwitterShare to FacebookShare to Pinterest
Labels: BC officials to assist Ottawa in LNG review of Pacific NW LNG proposal