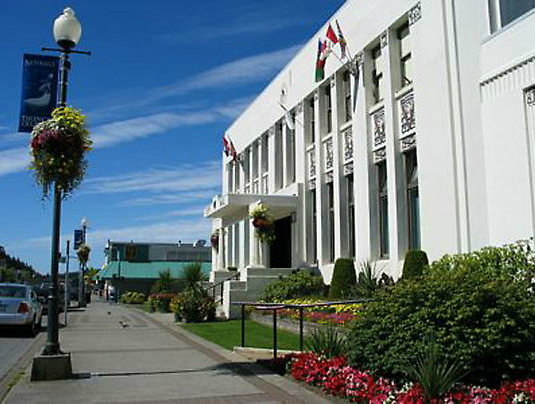 It's last call for Budget input at City Hall, as the Regular Council session for tonight makes some room for public comment on the Budget process.

The public receives its final opportunity to weigh in on issues related to the City's budget preparations tonight as part of the Committee of the Whole Session, which launches this evenings gathering in the Third Avenue Chambers.

As part of that Committee of the Whole portion of the evening, residents can also raise any other issues of interest prior to Monday's regular Council session.

When they return to their Regular Agenda for the evening a fairly light workload seems in place, for Council members to consider.

Council will hear a presentation from Richard Pucci the City's Director of Operations and Mr. Robert Grodecki the Executive Director of the North Coast Skeena First Nations Stewardship Society, as they provide an update on a proposal for the removal of the Moresby Fuel Tanks.

Following that Council will review a Report from the City's Director of Operations on the issue and review a recommendation to provide a letter of support for a grant application towards the removal project.

Council will also review and announce appointments to the Boards of Directors for a number of local Societies.

A recommendation from the Chief Financial Officer to adopt the Cow Bay Marina Fees and Regulations will also be acted up on at Monday's session.

Council members will bring the evening to an end with an opportunity to raise any concerns or questions that they may have, while there will also be another update on the progress of the Housing Committee.

Not featured on the agenda for tonight is any indication of the return of the status of the Kanata School land zoning issue, a controversial topic from the March 7th meeting that Council was hopeful of addressing quickly two weeks ago. However considering its absence from tonight's Agenda it would seem that it is not quite ready to make its way back to the Council chamber this week for any further discussion.

The full review of the evening ahead can be found from the Agenda for the Regular Council Session for Monday, March 21, 2016

Council will also meet in a Special Closed session at 5 PM, where they will discuss the following items that they note cannot be discussed in an Open public session:

the acquisition, disposition or expropriation of land or improvements, if the council considers that disclosure could reasonably be expected to harm the interests of the municipality;

and  negotiations and related discussions respecting the proposed provision of a municipal service that are at their preliminary stages and that, in the view of the council, could reasonably be expected to harm the interests of the municipality if they were held in public.


Below we'll highlight the different elements of this evenings work from the Regular session Agenda, for further background on each item, the page number from the Agenda is listed in red.

The Regular  Council session starts off with the adoption of agendas and minutes.

Petitions and Delegations will bring Mr. Robert Grodecki the Executive Director of the North Coast Skeena First Nations Stewardship Society to the Council Chamber, who along with Richard Pucci, the City's Director of Operations will provide an update on a proposal for the removal of the Moresby Fuel Tanks.

Any Unfinished Business is then up next on the Agenda.

Followed by Reports and Recommendations

Report from the Director of Operations  -- Council will review a report from Mr. Pucci and consider providing a letter of support to the North Coast Skeena First Nations Stewardship Society to assist with a grant application towards work related to the decommissioning of the Moresby Fuel Tank
(See page 8 of the Agenda )

Council will review a report from the Corporate Administrator related to appointments to the Boards of the Prince Rupert Performing Arts Centre, Prince Rupert Airport Authority, and Port Edward Historical Board.

Bylaws mark the next item of the Agenda on the night.

Report from the Chief Financial Officer  -- Background on the Cow Bay Marina Fees and Regulation Bylaw, with a recommendation that Council adopt the bylaw  ( see page 11 of the Agenda)

The evening then moves on to Additional Items from Council members, as well as Reports, Questions and Inquiries from Members of Council.

Council will hear an update from the Mayor on the Housing Committee providing the latest developments from their efforts.

Our archive of items related to the March 21st session can be found here.

While our archive of all sessions of 2016  for council  is available here.