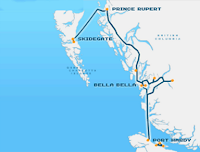 It was an issue that North Coast MLA Jennifer Rice raised in the Legislature last week, with the MLA noting during a presentation on the Great Bear Rainforest that while the province was creating a major attraction on the Central Coast, finding a way to get there is getting harder and harder to do.

Her comments to the Legislature are now backed up by a recently published report which notes that travel issues such as high costs and limited scheduling make access to the region a concern for those that live and hope to attract visitors to the region.

The Mid-Coast BC Ferry Working group which consists of representation from Aboriginal, Business and Community leaders in the Central Coast delivered their report to both the Provincial Government and BC Ferries officials.

A blue print of sorts to help grow tourism and ferry ridership, the report identifies the current barriers to accessing the Central Coast region and how that lack of transportation options is providing for obstacles for the tourism development plans that residents of the Central Coast have in mind.

The report outlines the drop in visitors to the region since Ferry Service was reduced four years ago and calls on the B. C. government to help design a regional tourism development plan.

BC Ferries has noted that it is reviewing its scheduling plans for the Central Coast and hope to have an announcement related to potential solutions in the near future.