For the moment, the majority of the North Coast focus on LNG of late has been related to the status of the Pacific NorthWest LNG project, with the proposed development currently in the midst of a ninety day pause to their Environmental Assessment process, before the Federal cabinet will begin its review process.

However, there is news of note from one of the other proponents of LNG development in the region, with word that Exxon Mobil Canada has submitted an application to extend the permit of its North Coast project to 40 years, an increase of fifteen years from the original terms approved in 2014.

The proposed development has targeted Tuck Inlet as a potential option for terminal operations which would see 30 million tonnes of LNG shipped per year.

On Tuesday, the National Post outlined some of the background to that request for an extended timeline, noting that Exxon Mobil has entered into a number of confidentiality agreements with several pipeline companies to deliver the gas to an LNG terminal.

The Exxon Mobil moves were also reviewed by the Globe and Mail's Brent Jang, who has been following the path of all of the proposed North Coast LNG developments in recent years. 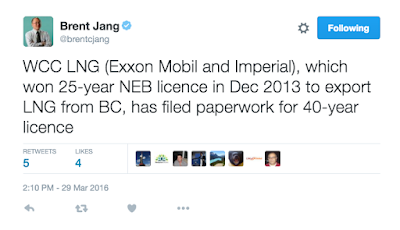 The proposed Tuck Inlet project is to be developed on land that the City of Prince Rupert brought inside the city limits as Lot 444 in 2014, since that time Exxon Mobil has provided a stream of revenue to the City through the city's Legacy Fund as it continues to investigate the site for its development plans.

The global energy company has included it's Tuck Inlet concept in its 2015 Annual Report which was recently released.  In a short passage related to the North Coast prospects the company noted:

Exxon/Mobil/Imperial Oil are in the early stages of project assessment and planning for a proposed LNG project in Prince Rupert, British Columbia. Through our jointly owned affiliate WCC LNG Ltd. Exxon Mobil and Imperial Oil received an export license  in 2013 from the National Energy Board to export up to 30 million tonnes of LNG per year for 25 years. Engineering and environmental studies continued in 2015, support concept selection and regulatory activity for the project.

The full report can be reviewed from the Exxon Mobil website.
The Prince Rupert mention can be found on page 31. 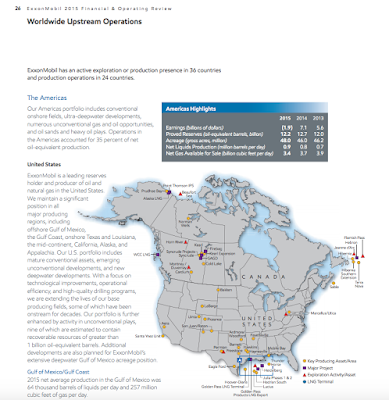 Email ThisBlogThis!Share to TwitterShare to FacebookShare to Pinterest
Labels: Exxon Mobil seek extension to 40 years for exports out of WCC LNG project at Tuck Inlet