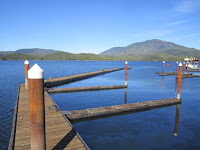 Opening Day is but a few weeks away for the latest attraction on the Prince Rupert waterfront, with the public invited down to the waterfront area of the Atlin Terminal on Saturday April 8th to officially open the new Public Dock of the Cow Bay Marina.

The party invitation was issued through the City of Prince Rupert's website on Monday, with Mayor Lee Brain making note of the anticipation for the opening and the access to the waterfront that the new facility offers to the public.

“It’s really excellent to see how much positive attention the public breakwater has received, before it’s even officially opened,” ...“We’re really happy to be able to provide residents with more waterfront access, something that community members have said loud and clear that they want, and a goal that the City has identified in our Official Community Plan.”

The project, began its journey during the  Mayoralty years of Jack Mussallem when the concept of a community dock to serve itinerant yachters was first proposed, that idea eventually evolved which into a partnership between the City, the Prince Rupert and Port Edward Economic Development Corporation and Community Futures of the Pacific Northwest.

The timeline towards the finish line for the project faced a few delays along its path towards completion, the funding and the main momentum for the project finally coming together in 2015.

The main structure started to take shape over the summer and the finishing touches were put in place over the winter by the main construction contractor Broadwater Industries.

The City recently hired Marty Bowles as the Cow Bay Marina Manager  and Council recently set in place the fees and regulations for use of the facility.

The April 8th Public Celebration will take place from 11 AM to 2 PM and is free to attend,  among some of the plans for the event will be free hot dogs, music and other activities.

You can learn more about the thoughts on the completion of the project from some the other partners from the City's media release.

For a trip down the Cow Bay Dock's historical path see our archive items here.
Posted by . at 10:03 AM