Pollution research the topic for lecture series tonight at NWCC 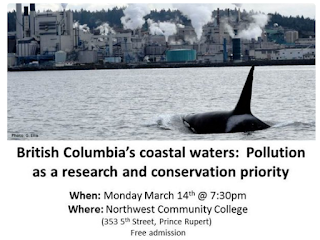 A highly acclaimed researcher on pollution will be in Prince Rupert this evening, providing a review of the latest work on marine pollution as part of North Coast Initiative of the Vancouver Aquarium lecture series.

Dr. Peter S. Ross, the founding Director of the  Ocean Pollution Research Program of the Coastal Ocean Research Institute will share some of the findings of he and his team in the field of research on plastic pollution, marine mammal health, oil spills, safe traditional seafoods and the implementation of a coast-wide pollution monitoring project.

Dr. Ross  has published over 140 scientific article and book chapters and has served as a research scientist with the Canadian government between 1996 and 2013. An adjunct professor at the School of Environmental Studies at the University of Victoria, he has pioneered new techniques  to evaluated the effects of pollutants on the health of marine mammals.

He has also attached great importance to his work with coastal First Nations and Inuit communities on issues surrounding safe traditional seafoods.

The Speakers Series is part of an ongoing engagement program from the Vancouver Aquarium and is assisted by support from BG Canada.

For more information on the North Coast Initiative of the Vancouver Aquarium see their Facebook page here.  You can also find out more about the work of the Coastal Ocean Research Institute here.

You can find updates on what is happening at the through the Prince Rupert office from North Coast Initiative Coordinator Caitlin Birdsall's twitter feed.

The event takes place at NWCC tonight starting at 7:30 admission is free for all those who attend.
Posted by . at 9:38 AM

Email ThisBlogThis!Share to TwitterShare to FacebookShare to Pinterest
Labels: lecture on pollution at NWCC tonight