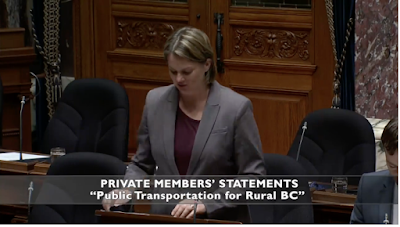 North Coast MLA Jennifer Rice rolled out the highlight reel for members of the Legislature on Monday morning, recounting some of the success in transportation issues that have been found across Northwestern British Columbia in the last year or so.

As part of her statement to the Legislature, Ms. Rice noted for the Members of the House how transportation along Highway 16, the Highway of Tears, had been a priority for her since her arrival in the House back in 2013.

Her quest for improved options coming from the calls of families of the missing and murdered women of the region, for some action on transportation concerns along the highway.

It was a frequent discussion topic for the new MLA upon her arrival in Victoria, one where she would often end her comments in the Legislature with one simple question of "Where is the Bus" ... a call for action to develop a Highway 16 corridor connection service from the North Coast to Prince George.

Things have changed significantly since those early days for Ms. Rice in the Legislature and on Monday she outlined just how much things have advanced when it comes to transportation:

Now, I'm proud to say that this government has been working hard to provide northern B.C. with safe, reliable transportation. We've expanded the inter-community transit along Highway 16. We've introduced B.C. Bus North, and we've also expanded the Northern Health Connections service to include more people that can take advantage of the health bus service.

We've also improved cell service along the corridor, which improves safety not just for women but for everyone travelling Highway 16. This weekend the Minister of Citizens' Services was in northern B.C. to announce that another 22 kilometres of the highway, serving over 5,000 people, will now have cell service. Witset, the community known as Moricetown, is the last remaining First Nations community along the corridor to gain cell phone service. And as I just said, increased cell service not only benefits the community of Witset but improves the safety for all travellers along the Highway 16 corridor.

Now, in just over a year and a half, the new inter-community transit service along Highway 16 has provided safe, affordable travel for approximately 12,000 passengers in northern British Columbia. The B.C. Transit program has been so successful that we introduced three new larger-capacity buses into the Burns Lake–to–Smithers and the Burns Lake–to–Prince George routes this past May.

The list of successful initiatives and future engagements to come, carried forward as part of her five minute presentation.

But one area of note that should stand out for folks back in the home constituency on the North Coast, comes from her account of the BC Transit Highway program across the Northwest.

And how from her observations as to how that option has become so successful that it has required larger capacity buses on some routes; is that the service stops in Terrace and travels no further west.

Nor did she indicate that there is any plan for that popular and successful service to come to the North Coast any time soon.

Ms. Rice's narrative for the House also left out some of the history of why the BC Transit service stops at Terrace.

A situation which as we've noted in the past came as a the result  of a decision by the City of Prince Rupert, Regional Government and other other area governments to choose not to participate in the service that connects residents from Terrace through to Prince George. 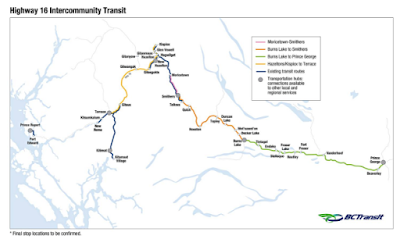 While Prince Rupert is served with twice a week transportation through the Friendship House, the BC North Bus and the Northern Health Connections option.

We continue to remain absent from the BC Transit concept that has proven to be so popular in those communities that it has been introduced to, with Prince Rupert City Council and their partners seemingly sticking to their path of what they called the right fit for the needs of the North Coast..

It made for some interesting political theatre on Monday for Ms. Rice, rising to praise the work of the government she is a part of and what they have accomplished in pretty well every corner of the Highway 16 corridor, except that one area of the Northwest which she represents.

Particularly as she noted for the Legislature, that it was that frequent call of "Where is the Bus" that has finally been acted on, first by the Liberals and then expanded on by the NDP government.

It's a call that some in the community looking for a service that will take them past Terrace may want to take up again, both on the provincial and municipal levels.

Perhaps with a new council membership set to take their place at City Hall, the newly elected, re-elected and acclaimed representatives on Council may want to review that decision.

Taking a second look at the prospect of moving towards adopting a regional transit plan that seems to have served every other community well and will help to provide for the final leg of that long sought for public transportation network for those in the most need that Ms. Rice once championed.

The Transcript of her comments for the Legislature can be reviewed here starting at the 10:10 AM mark.

The video presentation to the House is available below:

For more notes related to Transportation along the Highway 16 corridor see our archive page here.

Further background on the provincial scene from  Victoria see our Legislature archive here and our archive of provincial notes on our political blog D'Arcy McGee.