The volume of digital bytes used up over the last few days (not to mention audio volume of the discussion) on the theme of the Ridley Island Tax Agreement increased just a little bit more in content as last week came to an end.

That as Councillor Blair Mirau dipped a toe into the waters that at times were boiling through the week,  to reflect on the events since Mayor Lee Brain took to his Facebook Page to ramp up the acoustics on the topic of fair shares of Tax Revenue distribution from the current agreement between the two communities.

As part of Mr. Mirau's presentation, he offers up a link to an item from the weekly paper, which has seen the Mayor shift the narrative a bit, now calling for some form of a public debate on the issue.

Though before we pass the popcorn and settle in for the show, there are a few steps that the City could take to provide for more disclosure on this bubbling tempest.

As both the Mayor and Mr. Mirau reminds us in their respective contributions, there have been five facilitators and a mediator so far in the process, one imagines that they surely kept notes and provided a summary of the discussion for the two parties, so the city perhaps might want to share the findings of all of  that consultation on the ongoing dispute.

As well, both the Mayor and the councillor have observed that a detailed provincial analysis on the situation was delivered in relation to the 1981 deal, something that might be a useful addition to the current narrative. 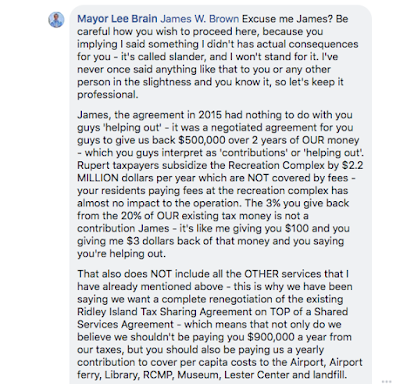 In his passage on his campaign website, Mr, Mirau calls for us not to get caught up in the moment ...


That, even though, it was the social media contributions of his two fellow City Council members, that appear to have created that loud provocative moment in the first place.

For much of the Facebook accounts of last week, the Mayor and Mr. Niesh at times, came across as those two loud guys at a social event, that you really don't want to end up sitting near.

Considering last weeks overheated drama from the Prince Rupert officials through the Internet, it's hard to see how Port Edward representatives will be inclined to sit down for a discussion any time soon.

So it might seem a timely moment to release the reports and other comments through the city's website, allowing that residents to see what all this sudden call to man the barricades is all about.

That might give residents of the region an opportunity to see all of that documentation and determine whether:

It shows the City's calls of unfairness as correct

If it informs us that a deal is a deal and that the District is right to stick to its path of the moment.

Or,  If there's more to this story that we should know.

Rather that the loud, bellicose nature of the last week, a chance to step back and take a quiet review of the facts as delivered by the independent voices of the facilitators and mediator may help to better state and understand the situation as stands at this time.

For more items of note from the 2018 Municipal Campaign see our archive page here.

Further background on City Council discussion topics both strident and subtle can be found from our Council Discussion Archive page.

Email ThisBlogThis!Share to TwitterShare to FacebookShare to Pinterest
Labels: Call for debate from Prince Rupert on Ridley Island Tax Agreement