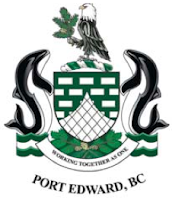 With one of the slimmest of victories seen on the North Coast in many a year, Port Edward has a new mayor tonight, as Knut Bjorndal bested incumbent Dave Macdonald by just ten votes.

With Bjorndal receiving 113 votes, while the long serving Mayor Dave as he had become known as tallied 103.

The difference in the percentage of vote less than 4 percent, third place finisher Doug Larsen collected 20 votes or 6.4% of the vote.

There will be change on Port Edward Council as well,whlie three incumbents; Dan Franzen, James Brown and Christine MacKenzie returning to the District Hall.

They will be joined by Murray Kristoff,  a familiar face in the District who returns to the position he last held prior to 2014.

The results of Saturday night leave Grant Moore as the lone candidate out of the five person race for the four available seats.

In the Rural School District vote, incumbent Janet Beil will return to office, she received 124 votes compared to her challenger Joanne Dudoward who received 101 votes.

Port Edward's voting public were far more engaged in the electoral process than those living in Prince Rupert, with 239 ballots cast from a election pool of 387 eligible voters.  That makes for close to a 62 percent participation rate in the 2018 campaign. 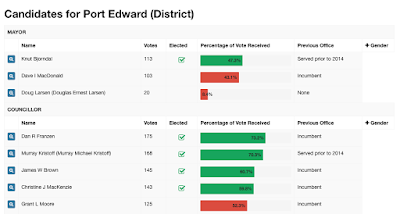 The change in the roster at Port Edward Council comes as relations with their neighbours in Port Edward have hit a bit of rough patch, whether the newcomers will make for a shift in opinions from the District on the theme of the Ridley Island Tax agreement remains to be seen, though the theme of unity on topic did seem to be the approach that all the candidates were looking towards during the campaign.

For a look at some of the other notes of interest from the District see our archive page here.
Posted by . at 10:31 PM