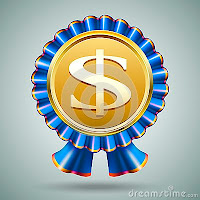 A last minute item added to the Agenda for Monday's City Council session will see Mayor Lee Brain and Council call for participants in what the Mayor has described as a Blue Ribbon Select Standing Committee on Remuneration that will be tasked to explore issues related to council remuneration.

The focus for the Committee members once selected, will be to review the announcement from Revenue Canada that will see a tax exemption for elected officials removed as of January 1st.

At the moment elected officials are eligible for a one third tax exemption on their salaries, but that will come to an end at the end of December.

As Mr. Brain explained the plan ahead, the tax exemption cut is among three elements that the Committee will be tasked to explore, they include:

1) Make a recommendation regarding how to address the impacts of the removal of the one third federal tax exemption will have on council remuneration.

The most recent salary disclosure for Prince Rupert's City Council came in June with the release of the Statement of Financial Income, which lists the salary payments for Council members as of the end of 2017. 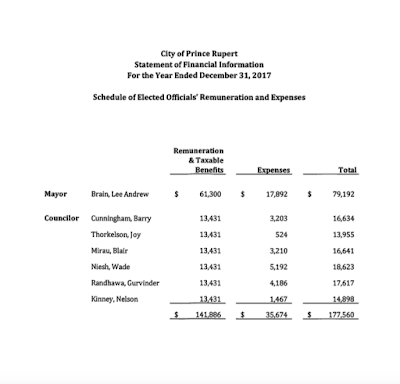 The Mayor and those Council members that are participants in Regional District also receive compensation for the work on that body, which in the case of the Mayor added another 13,507 dollars, plus expenses to his salary structure. 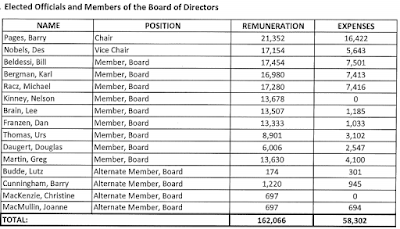 Like the City salaries, that Regional District total will also be subject to the loss of the tax exemption from Revenue Canada.

As part of the preamble to his call for the Committee, the Mayor made note of the work done in Prince George as an example as to how officials reconciled the level of increase in compensation in that community.

With the Prince George council approving a change which saw the Mayor's salary increased to $127,000 with council salaries increased to $37,000.

Though at roughly six times larger than Prince Rupert, perhaps the Committee that council will form will perhaps want to review the compensation levels of communities more in line with the city's current population level of 12,220 for a fairer review of salary expectations.

Terrace for instance, commissioned its own Task Force to address the issue in the Spring, delivering their report to Terrace Council in June.

The findings of that body included four options, with the Task Force recommending no changes to the Terrace salary structure, suggesting that it be tied to the Consumer Price Index and that the current remuneration reflects the same salaries of communities of similar size.

That Terrace report can be viewed here.

Prince Rupert would appear to be somewhat behind the municipal crowd when it comes to addressing the issue, we made note of the percolating salary concerns back in April, highlighting how other communities in BC have handled the issue and in some cases the fall out that came from their decisions.

Council's move to wait until the end of the year, comes after members of the last council have all been returned safely back to their seats for another four year term following Saturday's election vote.

With the 2018 campaign one where council salaries, including the Mayor's full time status and salary top ups achieved since 2015 through the Legacy Funding on major projects did not make for much, if any of the discussion during the campaign.

The mayor's current salary top up arrangement comes to a conclusion at the end of December, though it would appear that the status of any salary expectations for the next four years will fall within the parameters of the Blue Ribbon Select Standing Committee on Remuneration review, along with how the city will move forward with per diem payments as well.

Council however, will have the final say on any recommendations that are presented before any changes to the existing process would take place.

Coming as it does late in the year and depending on how long it takes Council to implement the Committee; the timeline could be somewhat rushed for a review of the issue, as opposed to had it been moved forward back in the spring or summer.

Also lost with the late in the year approach has been the opportunity for any Council discussion on the issue and the option of putting the recommendations to a referendum for the public in the recent election vote.

Something that may have actually helped to increase the voter turnout from the less than 30 percent that voted this year.


Council members outlined some of their thoughts on the committee plan on Monday evening, with Councillor Mirau in favour of the creation of the committee in order to gain comparisons with other communities and to set benchmarks.

Councillor Randhawa had questions about the committee formation, with the Mayor noting that a call out will be made to seek out participants.

Mayor Brain also indicated that at the least, the project should address the situation that will arrive in January, when the Federal tax exemption termination takes place.

"Ultimately if we don't do this, then the existing wages that councillors are doing now will actually be be a decrease in pay for them on the existing wage due to the fact that one third of their taxes won't be exempt by the Federal Government anymore. So, an adjustment should be made to at least get you to the same level of pay that you're getting now"

Councillor Cunningham explored some other elements for the Committee to look at in their study, including whether the committee can see if the city can afford any raises, and the impact on the tax structure if they do get a raise.

The Mayor observed that in relation to the tax issue, it wouldn't be a raise necessarily unless the committee recommended one, adding that a city staff member would be on the committee to be in line with where the city is going on those budget issues.

You can review the full discussion on the proposed Committee work from the City's Video Archive starting at the eleven minute mark.

Update: The Mayor has posted details of how to apply for the Committee through his Social Media Facebook page, those with an interest in applying for one of the positions, can forward an email to Mr. Brain at:  mayor@princerupert.ca

A wider overview of City Council discussion topics can be reviewed here.