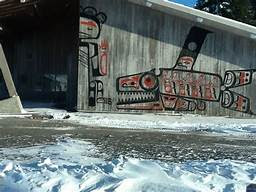 The School that serves Lax Kw'alaams from Kindergarten to High School is in the spotlight in the community today, that after Harvey Russell Junior, the Chair of the Coast Tsimshian Academy released a short announcement that advised parents and guardians that the School had terminated the employment of School Principal Kelly Rambeau.

The letter, which consists of just one paragraph notes that the decision to terminate the principal was made following notice from the School's auditors that outlined some financial irregularities.

No details related to those alleged irregularities were included as part of today's announcement.

The advisory to parents also noted that the Academy has retained counsel, in order to assist the school in resolving the matter.

Today was a Staff Day at the School with no classes in session at the Academy.

Two days ago the Coast Tsimshian Academy announced changes to the administrative team at the school, appointing Mr. Skye Mitchell as Interim Principal and Mrs. Cora Bark as Interim Vice-Principal, asking parents and guardians to discuss the changes with their children.

So far, the decision to terminate Mr. Rambeau, and to seek counsel has been greeted with confusion and concern by those that have weighed in on the topic through the Lax Kw'alaams Band Facebook page and that of the Coast Tsimshian Academy.

Among some of the commentary so far through those community contributions, include some concerns over past practices at the school, along with some that suggest considering a return for the community to the School District 52 arrangements of the past.

According to the statement for residents of the Lax Kw'alaams area, more details on the situation are to be released in due course.

For more items of note on the Coast Tsimshian Academy see our archive page here.