Broadway and Hollywood script writers take note, this is how you launch a fall season, introducing a plot twist that catches everyone off guard.

The September opening for the British Columbia's Legislature Players stage production of House of Cards certainly featured a fair bit of drama, as the new NDP government of Premier John Horgan introduced an element for the fall session more befitting the prime time television dramas or daytime soap operas.

By tradition, when a new Speaker is selected, the ritual is to have him dragged down the aisle to his post by the House Leaders, a bit of theatre indicating humility towards the task ahead.

However depending on who you were listening to on Friday afternoon, Liberal MLA Daryl Plecas was either a political figure that the NDP might compare akin to John the Baptist; or in the case of Liberals in the House, someone who was their very own Judas.

In the post mortem to Friday's launch of the fall session, the Liberals were giving every indication that their former caucus member was not so much being dragged to his new post reluctantly, as he was skulking in towards it through the back door.

Speaker Plecas is apparently inclined to play the long game in the Legislature, as he settles into the role of referee for the debate club at the corner of Belleville and Government Streets.

As he takes to his new duties, the new Speaker adds on a nice little top up to his Legislature salary, to go along with the perks that come with the office.

When it comes to tax deadline day in February,  Revenue Canada will want to take note that with his new duties, Mr. Plecas be adding close to $53,000 dollars to his existing MLA's salary of $105,882, though with political life does come some tax benefits for the accountants to take advantage of when it comes to taxable income.

Besides improving his personal financial situation, he has also added to the voting cushion now enjoyed by Premier Horgan and his NDP cabinet.

With the NDP already benefiting from their arrangement with the Green Party, and with Christy Clark's seat vacant and awaiting a replacement through a byelection, the margin between NDP and Liberals widens to a three seat cushion in the Legislature.

That's a bit of political arithmetic that gives the new government a bit more breathing room and less worries about a sudden confidence vote for the near future.

Such was the euphoria on the NDP side at their catch, that North Coast MLA Jennifer Rice appears to believe that it heralds at least  a number years ahead for fine NDP rule, taking to her Facebook page to take note of some of her past work with the Liberal MLA and to compliment Mr. Plecas on his new position. 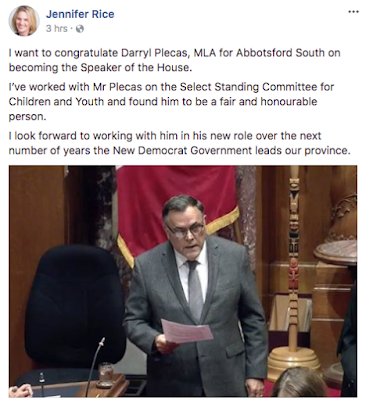 Premier Horgan offered his congratulations through an address to those in the House following the election of Mr. Plecas to his new position.

Hon. Speaker, I rise to offer my congratulations to you as the Speaker of the people’s House. The people in their wisdom sent and an equal number of members from two political parties and a third party to support the work of the great province that we happen to be living in. I am so delighted that you’ve taken up the challenge of keeping us honest, keeping us fair and keeping us on course.

Green Party leader Andrew Green, like the NDP members also had some nice things to say about the new Speaker, outlining his thoughts through a statement Friday.

“Darryl is known by his colleagues in the legislature as a person of exceptional ethics and high moral standards,"  ..."He will undoubtedly serve with dignity and honour as speaker of this house."

The positive praise of the NDP and Greens, wasn't quite the same vibe that the Liberal side of the Legislature was greeting the developments of the day with.

From their new and somewhat unfamiliar perch on the opposition side of their new reality, Liberals offered up a number of comments to highlight their disappointment and percolating outrage.

Interim Liberal leader Rich Coleman was providing for much of the commentary on the defection Friday, showing more than a few talking points on the days developments.

“When you tell your colleagues that you are not going to do something, they take you at your word, you break your word, you go do it, become the speaker, you defacto already joined the NDP,”

"Everyone had committed, including Mr. Plecas, to not run for speaker," ... "I took him at his word. Obviously, that word didn't mean a lot."

“Effectively that’s what he’s done, he’s given another seat to the Greens and the NDP by becoming the Speaker and doing it by basically not being honest with his colleagues or me,”

Shirley Bond, the former Liberal cabinet minister and a high profile Liberal MLA from Northern BC also had sharp words for the shift to the Speaker's chair for Plecas.

“The way you work with your colleagues and the respect you develop for each other is an important part of doing the job.”  ... “Sadly, that wasn’t the case this morning.”

Unless the shift to the Speakers chair is the kind of manoeuvre not seen since some Greeks snuck a wooden horse into the city of Troy, one imagines that Mr. Plecas is going to have to make for his own Thanksgiving dinner arrangements, his place at the Liberal banquet most likely shifted to somewhere near a washroom, or the kitchen, providing he even gets an invite at all.

With the Liberals as visibly annoyed as they appeared to be on Friday and still stewing as we move into the weekend, the fall session for the Legislature is certainly off to a dandy start.

Considering the acrimony that at times has made for the current of debate in the Chamber in the past, it is going to be fascinating to see how the Speaker handles the opposition commentary to come.

Keeping order in the Legislature is a challenging thing at the best of times, by taking the Speaker's position after previously advising his Liberal caucus members that he had no interest in it, Speaker Plecas has certainly made himself part of the ever fascinating narrative that makes up British Columbia politics.

Such was the nature of the surprise announcement of Friday, that it had equal footing, if not overshadowed the NDP blue print for the path of governance to come.

You can do a little MLA watching as the announcement was made, through the video archive of Friday's morning session of the Legislature, Mr. Plecas makes his walk down the aisle shortly after the morning session opened.

Some of the themes and commentary related to Premier Horgan's end run around his Liberal opponents can be found below:

Update: Judging by the Saturday missive below to the Liberal faithful, the next few months in the Legislature might be something to watch.

With the sitting members of the Liberal caucus still quite angry with Mr. Plecas, not to mention it would appear the leadership of party machinery and the rank and file membership. 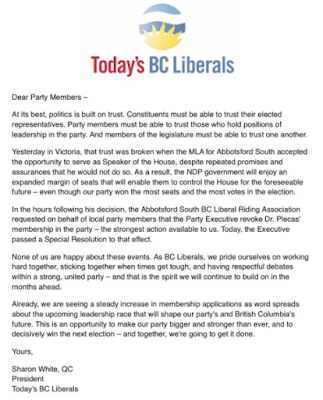 Needless to say, one suspects that Mr. Plecas will have to find somewhere else to grab a Turkey dinner come Thanksgiving, it would appear he will now be persona non grata at future Liberal events.


Further background to items of note for the North Coast from the Legislature can be reviewed on our Legislature Archive page.

More notes related to British Columbia politics can be found as part of our political portal D'Arcy McGee.

Email ThisBlogThis!Share to TwitterShare to FacebookShare to Pinterest
Labels: Darryl Plecas to the Speaker's chair