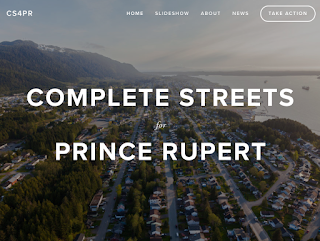 A civic action group called Complete Streets for Prince Rupert has moved into the active engagement part of their launch, taking to social media with some updates on what the group is all about and what they hope to achieve with their initiative.

The focus for the group is one to promote healthy living, sustaining the environment, stimulating the economy, as well as nods towards saving money and lives 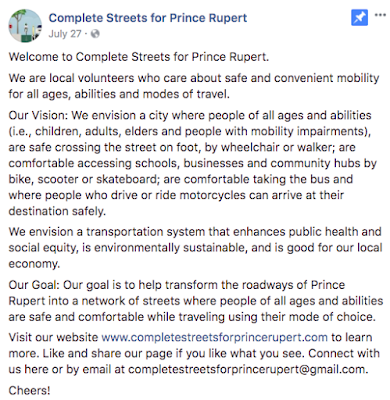 The project received a form of a soft launch earlier this summer when one of the group's spokespersons, Chris Lightfoot appeared at a Rotary Club luncheon to provide an overview of some of the initiatives that the program features.

A multi-media approach is now taking that message to a wider audience, with a twitter feed and Facebook page providing background to the issues and solutions that Complete Streets for Prince Rupert hope to bring to the attention of the public.

One segment of the video makes note as to how their program ties into the City of Prince Rupert's climate change initiatives and goals of sustainability.

The slideshow presentation outlines how the Complete Streets program can help to reduce the community's greenhouse gas initiatives and how they align with the city's energy and emissions plan.

Among some of the other areas highlighted through the presentation, the organization touts the ability to promote social equity in the community and how the Complete Streets program. As well as to offer up some notes on how Complete streets can add to property values, employment and attract new professionals to the community.

To reassure North Coast residents that they are "not a fringe group" the presentation makes note of the communities that have adopted their program, calling it "mainstream, progressive community planning".

Some ideas that the group shares for Prince Rupert is to adopt more safety orientated features such as the crossing area found by the Prince Rupert yacht club and a call for more flashing lights to be installed at area crosswalks.

As well, the group would like to see an expansion of cycling and pedestrian pathways and outline a plan of creating a Road Diet initiative in the community to make the cities streets more accessible for cyclists and other users. 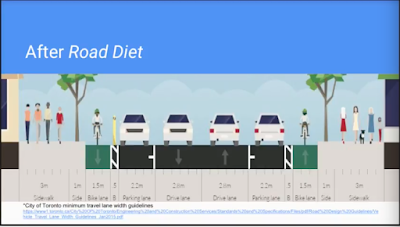 The group also tackles some of the issues related to cycling in Prince Rupert, answers a number of questions that many may have on cycling, as well as to explain how they would approach some of the hesitancy of residents to make better use of cycling options in the community.

On the theme of cost to implement some of their plans, they focus on the range of available provincial and federal funding that could be put to use to develop the Complete Streets for Prince Rupert idea.

Moving towards their goal, the group outlines how it is committed to undertake a comprehensive new Transportation Master Plan, which will include a street network hierarchy, improved bridge links and an emphasis on non automotive traffic and reduction of carbon emissions.

To highlight those goals, the group makes note of the City of Prince Rupert's Official Community Plan and how their initiatives would match up with that document.

As they look to implement some of their plans they outline a range of initial projects, included in the list:

A pilot project to completes to and through 3rd Avenue West.

While noting that some of their initiatives  for McBride and Second Avenue West may have to wait until a Port bypass route is developed to take the heavy loads of traffic out of the downtown core, they do suggest that the City launch negotiations with  the Ministry of Transportation to install pedestrian bulb outs on 2nd Avenue West and McBride Street for the near term. 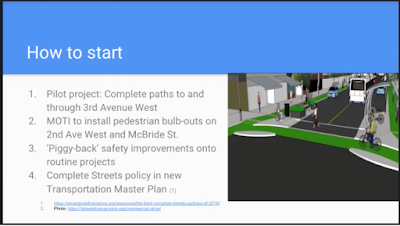 The project also seems to attache itself at the hip to Mayor Lee Brain's ambitious urban planning document the Hays 2.0 plan, with some rather effusive praise for how that program would

"It's time to complete our streets, Hays 2.0 aims to capture what Prince Rupertites care so deeply about: promoting economic resilience, protecting our natural environment, and working together to enhance our quality of life" 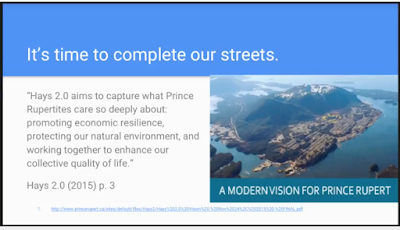 Such is the nature of the praise, and frequent use of civic background items, one might be excused if they somehow confuse the initiative not so much as a grass roots push, as one that advances the civic planning ambitions of the Mayor's office and civic departments.

There's probably no danger in the group being confused as a fringe group, considering the nature of the presentation and the call to civic initiatives, they seem to be adopting a rather mainstream image.

Though it's an image that almost takes on the role of the information sharing service for the Mayor's Hays 2.0 vision plan.

Something that we imagine that would be applauded by Mr. Brain and those council members that share those themes of civic development and long term planning, but it also might not be a helpful approach when trying to promote that grass roots concept of a community leading the discussion.

In addition to the Social media streams noted earlier, to find out more about the Complete Streets Prince Rupert program see their website

Since they've put the focus on some of the City's planning ambitions, you can review some background on development plans from our archive page here.

Further notes on the themes can also be found on our Council Discussion page.