The focus of the Inquiry in Missing and Murdered Indigenous Women and Girls will be on contributions from the Northwest next week, as the Commission membership arrives in Smithers for two days of hearings.

The public hearings will be taking place at the Dze L K'ant Friendship Centre Hall located at 3953 3rd Avenue in Smithers.

Sessions take place from 9 AM to 5 PM on Tuesday, September 26 and Wednesday September 27th.

The hearings will be available for viewing by stream cast through the MMIWG Facebook page and website.

Participants for those sessions have already been confirmed, after previous visits to the region by Commission staff, however  Statement takers will be present in Smithers to take further observations and stories in private from families and survivors.

Those private statements will not be part of the public sessions of the week. 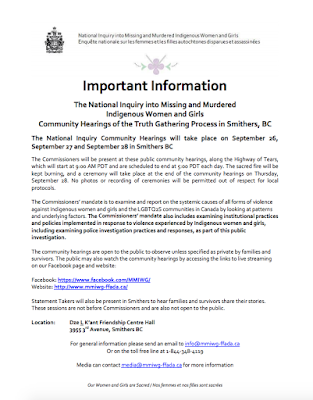 With the arrival of the National inquiry in the Northwest comes a fair bit of controversy. That after a tumultuous summer for the Commission, with resignations of Commissioners and Staff members raising a few flags for many that have had high hopes for the work ahead.

From the summer developments calls have been made from some First Nations leaders for changes to be made to how the Commission approaches its duties, while others have called for this version of the inquiry to be cancelled and for the Federal government to explore other ways to address the causes of violence against Indigenous Women and Girls across the nation.

With the spotlight put on some of their summer troubles, Commission members have started to push back against some of the controversy.

On Thursday the Commission members released this statement, reflecting their appearance in front of the Standing Committee on Indigenous and Northern Affairs.

The six page long review examines how the Commissioner's view their work and make note of the four principles that are guiding their work.

This month has also seen the Commission members take some of their thoughts to the media, with the remaining Commissioners calling for more time for the Commission to do its work.

This week the Commission expressed concerns over restrictions from government bureaucracy that they face, they also announced that they would now be including an examination of police investigation practices and responses as part of their investigation.

Now that the Inquiry is heading into an active hearing phase, interest in their work has increased across the Northwest, with participants in the hearing set to make their way to Smithers.

This week saw Gladys Radek return to Highway 16, leading a group of walkers from Prince Rupert to Smithers to arrive in time for next week's Inquiry sessions in Smithers.

Ms. Radek has organized six previous walks along the highway over the last decade to call attention to concerns over the Highway of Tears. Her niece Tamara Chipman disappeared on the highway twelve years ago.

Like many of the other cases listed among the missing, her case has yet to be solved.

That focus on the missing is one of the most important elements to the purpose of the inquiry, though at times with what appears to be infighting and confusion over their mission, some observers have expressed their fears that the inquiry has strayed from its reason for existence.

Skeena-Bulkley Valley MP Nathan Cullen has been following the work to this point of the Commission and has spoken out about some of his concerns, Mr. Cullen will be in Smithers next week to observe the proceedings.

The Smithers sessions will be the only British Columbia sessions for the inquiry this year.

As the Tuesday opening approaches, you can review some of the background to the inquiry process from our archive pages.

A comprehensive archive of notes  culled from across Canada can be found on our political portal D'arcy McGee.

With the inquiry now set for its Northwest debut, we have created an archive of notes that relate directly to issues and items of interest from this region, you can review that archive here.

Links to those two archives can be found as part of our North Coast Review Extra Editions section.

Email ThisBlogThis!Share to TwitterShare to FacebookShare to Pinterest
Labels: MMWG heads for SMithers