As the UBCM convention comes to a conclusion today, the members of the Northwest delegations are hailing some progress when it comes the the issues of the Northwest British Columbia Resource Benefits Association.

On Friday morning, the Northwest group released an information statement that highlights what the Association members call a positive meeting with the provincial government.

Though for the most part, the information release is one that leans heavily on political statement making and positioning; while a little less on detail as to themes of discussion from the meetings.

Kitimat Mayor Phil Germuth, the Co-chair for the Alliance. hailed the reception that the group received from the NDP government this week:

“The John Horgan government really understands that we experience great inequity in the northwest,” ... “The Northwest is the backbone of BC, and in order to ensure our communities continue to support economic development activities that contribute to the province, we need a share of the revenues to stay in the Northwest. The Premier sees that investing in the Northwest is not just about making up for lost time, but spurring growth in the region. It is an investment from which the entire province can expect a large economic return."

For Terrace Mayor Carol Leclerc, the cooperation and commitment of area MLA's was a point of note for her. 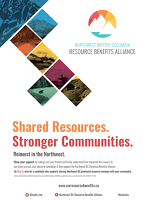 “It is also clear from the meetings this week that our four MLAs, made up of two NDPs and two Liberals, are taking a non-partisan approach,” ...“All four MLAs have committed to working together to make sure we get this deal done.”

Prince Rupert Mayor Lee Brain observed as to the ability to strengthen relationships with surrounding communities that an agreement might bring.

“This agreement will also ensure local First Nations benefit as well, by allowing us to strengthen relationships with the surrounding communities,” ... "This will be a win-win for everyone.”

For his part, Mr. Horgan did give a nod towards resource revenue sharing in his address to the UBCM convention of Friday morning, but had little in the way of details as to what the NDP government may have in mind towards that theme.

The timeline offered up for the negotiations towards a hoped for agreement is said to be six months, with Premier Horgan committing to checking in on the progress again in December.

You can review the Northwest BC Resource Benefits Alliance statement here.

More on the week of convention at UBCM can be found on our archive page here.
Posted by . at 11:21 AM