City Council is sliding backwards when it comes to civic engagement


The cancellation this month of a public comment period at Prince Rupert City Council makes for an unusual approach for the Council members when it comes to their oft stated goal of better engagement with those that elected them three years ago.

As we noted last week, the surprise notification of the September cancellation for a Civic process known as the Committee of the Whole, was based on an advisory that no members of the public had come forward with items for the agenda.

From that observation Council through its cancellation of the session removed any opportunity for public comment this month, even though they had not previously indicated that submitting an item for the Agenda was a requirement for participation this month. 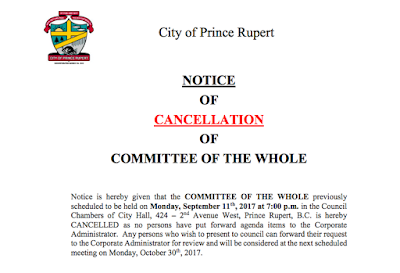 The cancellation of this week's COW session marked the thrid time this year that the opportunity for public comment offered by that process has been eliminated owing to an abandoned session.

The notice of requirement for submission of an item for the Council of the Whole agenda however, appears to be a new feature for this council.

Previous to this month, all one had to do should they have a question for council was to approach the microphone at the scheduled Council session and share their comments with those in attendance.

The announcement of last week did not make clear if this requirement is now a permanent feature of the council process, and no further information has been relayed through the City website to offer up more guidance for the public when it comes to their public engagement with their council.

As well, even on a night when Council didn't have much to deal with on their agenda, not one member of Council in attendance on Monday made mention of the cancelled opportunity for comment by the public, nor did they offer any comments as to whether they are in agreement with the move.

Left unsaid for now, is whether Rory Manrdryk
the City's Corporate Administrator is now some kind of City Council version of a Game of Thrones like Watcher on the wall.

Holding the watch to decide which residents can, or can't approach Council with questions and whether  the Corporate Administrator will hold final approval on any topics that residents may suggest for inquiry.

With this month's session taking up only 20 minutes of their time on the night, it's puzzling that the the Mayor and Council members felt that their time in the Council chamber this week should not be taken up with any questions from the public.

Especially when one considers that Council just spent four months on a reduced summer schedule of but one meeting a month and for the most part, the Committee of the Whole process doesn't exactly bring out the masses, seeking to participate.

It's a rare night when more than one or two citizens take the time to show any interest in their Council and ask questions and now it seems, they'll be required to book an appointment if they wish to do so in the future.

Still the power of the opportunity for the public to show their concern is one that should not require additional hoops in the way in order to take part in.

Council discovered just how passionate the public can get on an issue a few years back when they had to address many public concerns when it came to Library funding issues.

That public input came from the very same instrument that the City seems less and less inclined to make use of, with a large contingent of Prince Rupert residents attending the the public comment period of the Committee of the Whole to share their comments in late January of 2016.

Beyond the added layer of bureaucracy for simple engagement with elected officials, some of the other areas where council members have expressed some concerns on how the council is perceived seem to be falling through the cracks as well.

Councillor Mirau recently called attention to some of his concerns over the frequency that City Council has taken to Closed session to discuss items they believe are best not discussed in the public forum.

And while he managed to get the topic onto the agenda of a recent council session, there was very little discussion from the other council members as to how they believe the Closed Council process should be addressed.

And while they may have considered the issue, since Mr. Mirau's contribution to the topic was explored, Council has continued to move to Closed Session with regular default, numbering fifteen for the year as of last Monday.

Considering the brevity of many of this years regular council sessions, one wonders if the Closed Sessions perhaps run as long, or longer than some of the public ones.

Councillor Cunningham has also seen some of his past initiatives for council gain less than full traction, one plan to have City Department heads and other representatives of services provided to the city appear at Council to provide a public update has been slow to be put into action.

Other than a recent presentation from the Commander of the Prince Rupert detachment of the RCMP, Council has received no other delegation to provide the updates, that despite the fact that more than a few council meetings, including this Monday's, have clocked in at under the 20-40 minute mark.

Three years into their mandate and with one more year to go, we seem to have come a long way from those early weeks of  2015 when there was much talk of frequent town halls, and new and exciting ways of engaging with the public.

Those were themes that Mr. Brain once proposed for the public, making them key elements to his challenge to then Mayor Jack Mussallem during the last election campaign.

In a media release from those days on the campaign trail, it was noted that Mr. Brain himself had much to say on the theme of transparency back in September of 2014.

At the time calling attention to the frequent use of in-camera meetings leaving residents "in the dark as to the on-goings of  City Hall"  and how the City council of that time had failed to engage people on big ticket issues such as the Pellet Plant and proposed developments on Lot 444.


Heading to the fourth year of his Council's term however, we still have the ongoing theme of just how many Closed Sessions are too many to explore and we can now insert the City's plans for Watson Island, into the slot previously held about lack of engagement on other big ticket issues.

As for that checklist of public engagement offered up by the Mayor?

The monthly town hall meetings promised during the election campaign never came to pass, and other than a Council meeting update posted to the city website (when they hold council meetings)  there still is no weekly column to be found from any form of communication portal.

We however do get a few notes on civic duties from the Mayor's Facebook page, along with snapshots of some of the events he attends, or notes he wishes to share on topics of interest to him.

Now to be fair to Council, at times getting the attention of the public can be a challenge.  Some of their past attempts at community engagement have not provided for the results they surely had hoped for.

Attendance for some such as this years Council Budget forum have been sparse, while others that explored potential land use themes have had better success at gaining attention.

One such initiative was the October 27th 2016 Redesign Rupert Recharge event, a gathering which offered door prizes as an enticement to attract larger crowds

The frustration at the lack of interest by the public has been expressed at more than a few council meetings over the course of this elected mandate, with Councillors Niesh and Cunningham often noting the lack of attendance at the public access opportunities that are offered, including public hearings on land use in the community.

Still, the goal of council should be one to find a way to have their work resonate better with the public, as well as to make it easier for residents to participate in the few public access options that they have.

Cancelling those opportunities, or making the path to participation time consuming and complicated, does not seem the best way to encourage the public to become more involved in the process.

More notes on Council issues and discussions can be found on our archive page here.