Shortly after the NDP took power in Victoria, North Coast MLA Jennifer Rice was quick to declare that one key campaign promise had been kept.

Posting a helpful Banner notice for her constituents through her social media streams, which proclaimed success on the NDP's plan to ban the Grizzly Trophy hunt in the province with a particular focus on the Great Bear Rainforest. 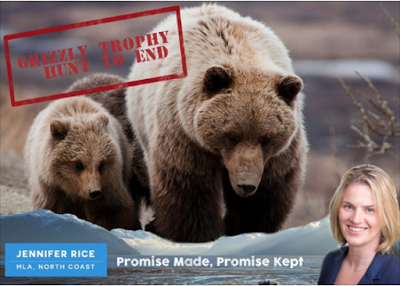 The Promises kept theme and subsequent shout outs of success however will apparently remain on hold for the short term, as a number of other key campaign issues on the North Coast seem to have been put to the political back burner in Victoria.

At the top of many lists in Prince Rupert is the fate of the replacement for the Prince Rupert Middle School,  that made for a fairly popular topic for Ms. Rice during the course of the election campaign, and while the NDP government has indicated plans for expanded funding for education in the province, actual news on the SD52 issues seems hard to find.

Monday's financial update from Finance Minister Carole James offered no background on the NDP's infrastructure plans and no timeline when it comes to addressing the SD52 concerns over the aging facility on Ninth Avenue West.

However, as the Tuesday budget document indicated the Child Care initiatives for the most part were deferred to the future, perhaps partly in response to some direction relayed to the NDP by their new partners in the Legislature of the Green Party.

Likewise Affordable housing for the North Coast is still an area where little is known of the Provincial Government's blue print ahead, with money allocated for 1700 new units as part of Tuesday's speech, but as has been noted so far, there is no indication as to where those units will be built.

That's a situation that leaves local officials around the North Coast still wondering how to address the growing issue of housing for those in the most need.

Another area of note for the North Coast, that of the need for a Conservation officer for the region based out of Prince Rupert also seems to be in a state of pause, with no additional funding indicated for the Conservation Service to expand on their service delivery for the region.

A review of what was and wasn't part of Monday's financial update can be found here.

Following the introduction of the Budget update, the North Coast MLA offered up some key talking points through her social media stream, highlighting the positives that she found in the financial update. 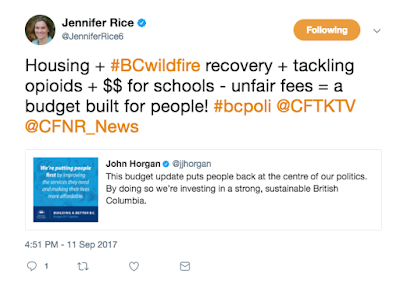 Once she's got that background information, perhaps an update and potential timeline for the folks back home might be helpful.

Part of the narrative for Monday's Budget was a call from the Finance Minister for patience, particularly as the new government looks to address the many areas that made for their campaign promises.

Ms. Rice may quickly learn just how patient the residents of the North Coast might be, especially if there isn't some kind of indication that progress is coming on the key issues of note from the region.

For more items related to the North Coast at the Legislature see our archive page here.

A wider overview of provincial politics is available for review on our political portal D'Arcy McGee.
Posted by . at 12:56 PM