The Sunday storm that arrived on the North Coast had a particularly hard effect on the Kitimat area yesterday, with the volume of water that fell in the region giving the Kitimat River cause to break its banks and with it stranding people with rising waters while providing for damage to cars and recreation vehicles parked nearby.

Photos and videos posted on Facebook provided some indication as to the sudden rise of the water and the damage caused particularly in the Big Spruce area of the District.

Earlier today the District of Kitimat had posted a special advisory for residents calling attention to the dangers that the riverbanks in the community posed. 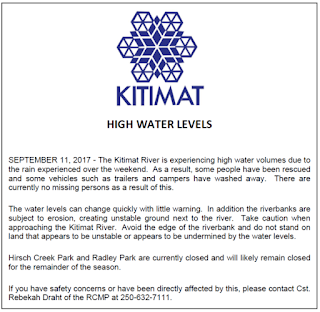 The most recent reports from officials in Kitimat indicate that 13 people were rescued by Emergency responders, included in that response to the incident were the Kitimat Search and Rescue unit, as well as the and Terrace Swift Water rescue team.

As well, the Kitimat Search and Rescue unit activated a helicopter as part of the response.

The Kitimat RCMP issued an information statement this morning to update the community on the overnight events, as well as to advise which roads in the community are closed.

An updated statement from the Kitimat RCMP can be reviewed here.

Some of the news accounts from the Kitimat area offer up a bit of background to the weather emergency suffered by the community on the weekend.

More notes related to Northwest Emergency Responders can be found on our archive page.

Email ThisBlogThis!Share to TwitterShare to FacebookShare to Pinterest
Labels: Flooding in Kitimat September 2017