A short trip to the Nass now complete, the C3 expedition has now tied up at the Cow Bay Dock with a four day stopover on the North Coast before they cast their lines for the next stage of their journey to Haida Gwaii and then points south.

The Polar Prince, a converted Canadian Coast Guard vessel arrived in Prince Rupert in the morning mist, with skies beginning to clear as crew members took to some of their immediate port side tasks.

Ahead for the vessel is an opportunity to show off some of their work of the summer, a journey which saw the vessel transit from Ontario along the Canadian Atlantic Coast and through the Arctic. From there it embarked on its current leg around Alaska and now onto the Canadian Pacific coast with a destination of Victoria still to come at the end of the extensive tour.

Regular readers of the blog, have been able to track the journey of the Polar Prince from our original item of August 18th, which picked up the trail as the vessel transited into the NorthWest passage.

It's arrival in Prince Rupert today makes for the end of the twelfth leg of it's Canadian journey bringing a mixture of crew members that include musicians, scientists, First Nations leaders and youth ambassadors.

The ship will be at the Cow Bay Dock through the weekend until October 2nd.

According to the most recent update from the Expedition team those looking to explore the vessel can do so on Saturday from 1 until 4PM. 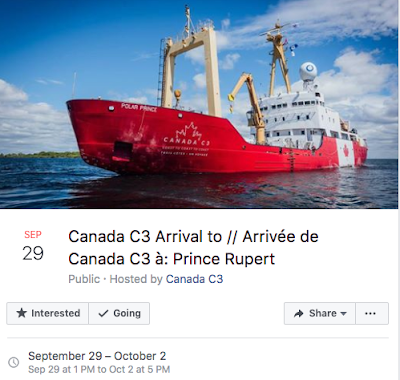 The Canada C3 expedition website also features a large volume of information about the journey.

More notes related to North Coast events can be found on our archive page.
Posted by . at 3:08 PM