The first curtain call for the year takes place tonight at Prince Rupert's Lester Centre, as the city's Performing Arts centre hosts the first of the eight shows on their 2017-18 calendar.

Leading off the eight show program for the year is Love Bomb, which takes to the stage tonight at 7:30, brought to the Lester Centre by Shameless Hussy productions.

The Travelling Mabel's stop in Prince Rupert on November 2nd as the group brings their folk/country themes to the stage.

Also in November will be the Huu Bac Quintent part of the Montreal Jazz Scene they feature influences from Asia, Europe and South America, they're on stage November 23rd.

A break over the holidays and the stream of Christmas presentations that dominate the Lester Centre will seen the lights come back up for the season package in January.

Roy and Rosemary bring Hollywood's cinematic classics to life on January 21st with Cody Karey also part of the evening's line up.

February features two shows in the series, the first an appearance from Alysha Brilla, who takes to the stage on February 9th, the Juno nominated artist recently released her third self produced album.

Down easters will want to get ready for March, with the Derina Harvey Band showing their Kitchen licks and Celtic Rock tunes on March 10th, bringing the curtain down on the 2017-18 season.

Season passes are only available from the Lester Centre Box Office and they are transferable should you find you can't make one or two of the shows.

Individual tickets go for $25 for adults and $15 for students, except for the Ballet which has pricing at $30 and $20 dollars. 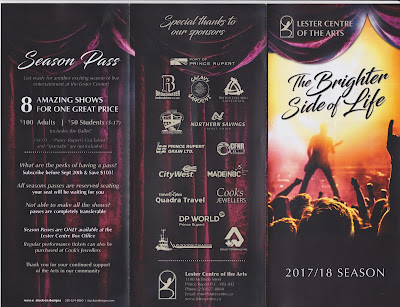 Not included in the season pass package, but certainly worth keeping an evening open for will be a couple of other high profile events.

Auditions for that event come up on October 1 and 2.

And the highly anticipated Community musical this year will channel our inner Pythons, as Prince Rupert's talented theatrical and musical collective embrace the challenge of Monty Python's Spamalot.

The musical theatre production is based on the 1975 Monty Python film Monty Python and the Holy Grail the local project will provide some showcase moments for North Coast actors and musicians.

The always popular community theatre presentation is scheduled for a run from April 5 to 7.

An introduction to the project is scheduled for October 5th at 7PM, auditions for parts in the show take place from October 16 to 18.

You can keep up to date on Lester Centre events and additions to the schedule through the year from the Lester Centre from their website and Facebook page.

For more items related to community events on the North Coast see our archive page.

Email ThisBlogThis!Share to TwitterShare to FacebookShare to Pinterest
Labels: Lester Centre line up for 2017-18 Season series