When it comes to the bank accounts of British Columbians, some of what is yours, is about to become theirs and will make for some much desired currency for politicians, at least as far as British Columbia's campaign finance reform is concerned.

Somebody has to pay appears to be the underlying theme to the plan put together by the NDP and Green Party to get big union and corporate donations out of the British Columbia political process and in the short term, that somebody is going to be the taxpayers of the province.

Monday, Premier Horgan pointed to the guiding theme for the new approach on financing the BC election process as the program made its debut at the Legislature.

“We’re reforming campaign finance rules to make sure government’s actions and decisions benefit everyone, not just those with deep pockets,”

Part of the grand announcement of the changes to come of Monday include tapping the taxpayer's pockets deep or not, for what's been estimated to be as much as 27 million dollars over four years, kind of a bit of bridge financing for the politicians as they are to be weaned off their old ways.

That's 27 million dollars that won't be going towards any social program, educational funding or housing initiatives, instead it will be allocated to ensure that the politicians we elected can continue to run campaigns as they've become accustomed to.

The twin partners are calling it a transitional annual allowance over five years and here's where taxpayers might want to get a little bit nervous, a special committee of the legislature will review the allowance to determine if it should be continued.

Something your great grandparents might say sounds somewhat familiar, recalling for the youngsters out there about a temporary initiative of their day called income tax.

From that "allowance" the NDP/Green plan will see politicians receive funding on the following scale: 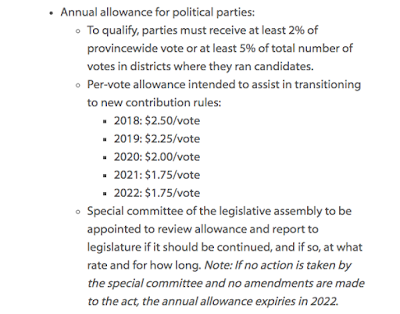 The only recourse for British Columbians that may not agree with the new funding formula may be to not bother to vote, thus reducing the take for the politicians by one $2.50 contribution at a time, but at the cost of delivering voter participation to levels even lower than they currently are.

This version of the Election Amendment program is one which neither of the architects found in the Green and NDP parties bothered to share with the voters prior to the May election, something perhaps that might have shifted a few of the current deck chairs on the Good Ship Legislature.

Most across the province likely understand the need for a change in how the parties collect the cash that makes a political system work, the British Columbia political funding system was clearly something requiring reform, particularly in eliminating the ability of special interests and large financial contributions to shape the election process.

However, most probably might have thought that those politicians would just have to learn how to settle for smaller donations from individual supporters, not make for another dip into the provincial treasury to deliver a program that looks a lot different than what British Columbians most likely expected.

In fact rather than having an independent election authority determine the financial changes to be put in place, the NDP and Greens got together in the backrooms and corridors of the Legislature, without any actual consultation with those that will fund the program, to cobble together their let's take it to the people agenda.

Beyond the money grab that the new project seems to indicate is on the way, the mechanics of the campaign financing reform program were outlined by Attorney General David Eby who proclaimed the main theme of the new approach as follows:

“This legislation will make sure 2017 was the last big-money election in our province,”  ...“The days of limitless donations, a lack of transparency and foreign and corporate influence over our elections are history.”

Some of the main themes to the amendment include: 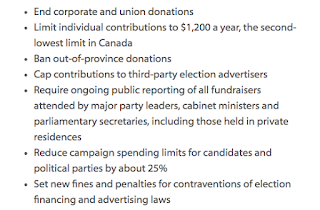 As he relayed the terms of the new campaign financing program Minister Eby highlighted how "these unprecedented changes will not only end the 'wild west' of campaign fundraising, they are an important step in modernizing our democracy"

Considering how the NDP/Green initiative plans to be funded, the wild west metaphor is somewhat appropriate, after hearing of the new funding plan for the political trails ahead, many in British Columbia might be feeling like they just stepped off a stage coach or train only to be greeted by Jesse James.

The full roll out of the proposed Election Amendment Act - 2017 can be reviewed here.

The statement from the government announcing the program is available here.

The follow up briefing from Mr. Horgan and Mr. Weaver's commentary on the Amendments can be viewed here.

While more than happy to take their victory lap on the new initiative, neither of the two political leaders took questions from those anxious to inquire about plan, leaving Minister Eby to face the questions of the media collective at the legislature.

So far North Coast MLA Jennifer Rice hasn't had much to share with her constituents on the program through any of her information streams.

As the government moves forward with the act, it will be her job to sell the concept of taxpayers providing financial support for political parties even more than they currently do by way of salaries and operational funding for the Legislature.

Somehow we suspect that the Promises Kept banner she has handy for such announcements won't be flying quite as high this time around when it comes to celebrating the campaign financing plans.

Some background notes and commentary on the new campaign financing plan can be reviewed below:

A wider overview of the political developments in Victoria can be found on our D'Arcy McGee portal.