Having decided long ago that he didn't want to be King, Nathan Cullen instead could be a Kingmaker with his announcement today that he will be putting his support behind the quest of Jagmeet Singh to become the next leader of the Federal NDP.

As part of his announcement, Mr. Cullen, the MP for Skeena-Bulkley Valley called attention to some themes from Mr. Singh's campaign that resonated with the him, including a commitment to electoral reform and a green economy.

The statement of Support was quick to be posted to Mr. Signh's campaign website, with the long time MP highlighting a range of attributes that led him to his decision. 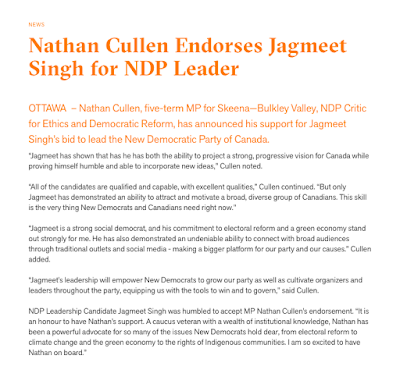 In a media presentation earlier this morning, Mr. Cullen noted that the NDP leadership candidate ticks all the right boxes for him in moving the NDP forward, he also offered up some interesting observations on how the party lost seats in the last election and what it will take to defeat Justin Trudeau and the Liberals in the next election.

The NDP have been somewhat adrift since they dropped to third party status following the 2016 election, the days of high exposure as the Opposition party now behind them, they are looking to recapture the progressive vote in the country that joined the wave of supporters that put the Liberals back into power.

Mr. Cullen ran in the 2012 leadership contest, finishing third at the time in the race which brought Thomas Mulcair to the House of Commons and the helm of the NDP.

He had been considered the favourite to claim the leadership following last years NDP leadership review and subsequent call for a new leadership race .

However lin June of last year Cullen took himself out of the race, citing family concerns and commitments as his requiring his focus.

Despite many attempts by NDP members to convince him to change his mind, the MP held to his decision as the current leadership campaign began to hit full throttle

The decision to throw his support to the Toronto area MLA in the Ontario Legislature will certainly come as a disappointment to fellow caucus member Charlie Angus the Northern Ontario MP who had been considered an early favourite in the race.

Though perhaps Mr. Angus fell out of favour with Mr. Cullen after suggesting a potential window for support for oil pipelines should he take the lead of the NDP.

There are two other candidates in the competition to replace Mulcair, they include Manitoba's Niki Ashton and MP Guy Caron.

Gaining the support of a highly respected member of the Federal party such as Cullen, could provide the final push to secure the leadership for the relative newcomer on the federal scene

The NDP voting process got underway on Monday, leading up to the announcement of the winner to come as the month of October moves forward

Mr. Cullen offered up a teaser for his announcement of the day earlier this morning posted to his Facebook page.

Some notes on the Cullen endorsement can be found below:

Further notes from Mr. Cullen's work at Parliament and with the NDP can be reviewed on our House of Commons archive page.