One item on Prince Rupert Mayor Lee Brain's to do list at UBCM, has been to keep up to speed on the latest developments from the British Columbia Municipal Climate Leadership Council, which is holding sessions as part of this week's convention.

Mr. Brain became a member of the Leadership Council at last years UBCM meeting and was featured prominently in the class photo from this year (see above) in addition to the Mayor, other participants in the Council include the following municipal politicians:

The Council members have not released any details of their work at UBCM so far, though Mayor Brain took advantage of his attendance to highlight some of the initiatives he is working on in Prince Rupert, posting some background to his Facebook page on Wednesday.

Included as part of the update, was a mention of the work of a committee the Mayor has put in place to address his 2030 Sustainable City project, that group is developing a policy book that will explore a range of environmental themes, with plans to take the project to public engagement sometime in 2018. 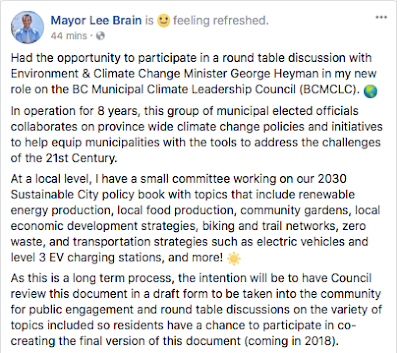 One area of discussion themes that those that met this week may have tackled could be the status of planning for an upcoming climate conference that the Council will be hosting in November in Vancouver. 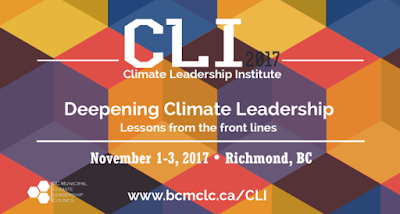 That conference seems to destined to bring together climate action leaders, BCMLC members and leading professionals for 2.5 days of what is described as intensive training.

Scheduled to speak at that event include Mayor Walton of North Vancouver and Chair of the BCMCLC, Travis Streb a communications coach and Group Facilitator and former Vancouver Mayor and BC NDP Leader Mike Harcourt.

All will share themes on sustainability and action on the environment.

You can learn more about the British Columbia Municipal Climate Leadership Council here.