As the 2017 UBCM convention preparations head into the home stretch, the City of Prince Rupert has made their RSVP's for the five day conference in Vancouver, with Prince Rupert set to send a seven person delegation to the annual conference on municipal issues taking place September 25 to 29.

Mayor Lee Brain will lead the group, which includes three Council members; with Barry Cunningham, Blair Mirau and Wade Niesh all making the trip for this years meetings. 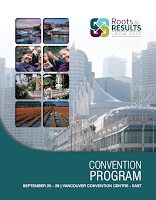 Mayor Brain will apparently bring the narrative of Prince Rupert's placement as a preferred trade gateway to the conference, as the city seeks to engage with senior government officials at the Federal and Provincial level

“UBCM is an opportunity for us to bring our unique concerns before the new government,” ...“Our Port is now a preferred trade gateway and a real asset for BC and for Canada. We are looking to senior levels of Government to ensure that our municipality can keep up with servicing our community as it grows alongside the port.”

In a media statement released by the city, it was noted that the city's senior staff members have arranged for what are called staff to staff provincial meetings to advance a range of issues.

Among the themes that the Prince Rupert delegation hopes to raise during the UBCM conference are:

The need for the expansion of the Prince Rupert landfill

A request for a policy of adjacency to be considered for the fishing industry in BC,

As well, the City has placed some key Municipal-Provincial concerns at the top of their agenda.

The City has also identified some key areas for improved regional transportation as a topic for further discussion, including and especially the Prince Rupert Airport Ferry service and associated infrastructure.


The UBCM meetings get underway on Monday, events are scheduled through to the final session of Friday morning.

As we have in past years, we will be tracking the week long festivities dedicated towards municipal government in British Columbia.

You can get a sneak preview of the week long events in Vancouver from the UBCM Convention program here.

You can follow our archive of notes from UBCM here.