Bringing the Beer Festival to you, High Five tour set to start this week

As we wring out the final few days of the summer of 2017, a unique tour of the Northwest is about to bring a sample of some of the local craft brewery potions from across Northern British Columbia.

This week the Brewers of the High 5 Beer Tour will take to the road, with stops scheduled for Terrace, Kitimat, Smithers and Prince Rupert to bring the tastes of fifteen different brews of the North to thirsty beer lovers across the region.

Participating in the four city tour are five regional brewers who are clearly quite enthused about the opportunity to spread the word about the North's growing brewing industry. They take to the road with a full load of their most popular brews and look to build their brands with a number of events through this week.

The tour starts in Terrace this Thursday at the Terrace Curling Club. with the Prince Rupert event of Friday set for the Fisherman's Hall.

Kitimat's Firefighters host the Saturday event to be held at Riverlodge, with the trek through the Northwest coming to an end on Sunday in Smithers at the Applehorn Bistro and Bar.

Bringing their creations to the Northwest are


Also part of the collective is the hometown favourite, Wheelhouse Brewing the popular destination for many a Rupertite.

The tour is kind of a reverse take on the popular Beer Festivals of the larger population centres, with the five Northern brewers taking the party to the region, rather than have the residents of the Northwest have to travel to one central location.

The background on the Prince Rupert stop set for this Friday at Fisherman's Hall on Fraser Street is as follows.

The Beer Tasting takes place from 5 PM to 10, followed by a performance by Prince Rupert's own Dixie Dead Shake. 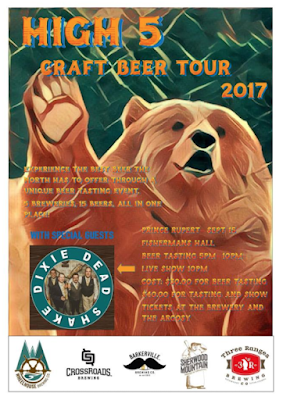 Ticket pricing for the Prince Rupert event includes a range of packages.

Advance tickets are available at the Wheelhouse Brewing Company on 1st Avenue East just above the Atlin Terminal area, or at the Argosy on Third Avenue West. 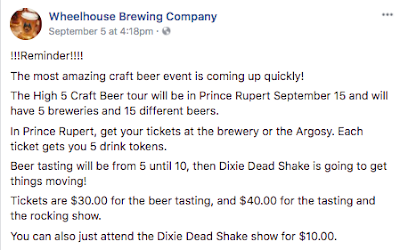 As well, the Wheelhouse has provided updates on their recent travels to Victoria as part of the annual Great Canadian Beer Festival which wrapped up on Saturday


Tour organizers have been spreading the word on this weeks travelling Beer Festival,  with some regional notes to be found below:


More notes related to the Northwest commercial sector can be found here, while an archive of community events on the North Coast can be reviewed here.
Posted by . at 11:30 AM