Fresh from announcing his candidacy in the upcoming BC Liberal Leadership race, candidate Mike de Jong will make a quick trek to the Northwest, with a two day blitz of the Skeena riding.

The Skeena riding association announced the invitation for residents of the riding to take in what are being described as conversation sessions scheduled for Wednesday and Thursday.

Those that drop in can ask questions of Mr. de Jong and discuss the role the region plays in support of the province, as well as to bring attention to some of the Northwest issues for the would be Liberal Leader. 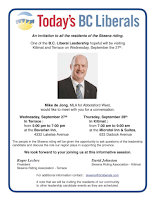 The Terrace session takes place on Wednesday from 5 PM to 7 PM at the Bavarian Inn on Lakelse Avenue.

Thursday the former finance minister will be in Kitimat for a breakfast gathering from 7:30 to 9 AM at the Microtel Inn and Suites on Dadook Avenue.

The Skeena Liberals appear to be hoping that this is just the first of a number of opportunities for residents of the riding to meet the candidates, with a note advising that as other candidate events are scheduled invitations and details for the public will be outlined.

To this point there is not indication if the North Coast Liberals will be bringing Mr. de Jong to Prince Rupert or across to Haida Gwaii for similar meets and greets.

Mr. de Jong is making his second quest for the BC Liberal leadership, some notes on today's jump into the race can be found below:

With his candidacy de Jong joins a roster of seven other candidates so far to put their names forward for the now vacant leadership post following the resignation of former Premier Christy Clark.

You can follow along with the latest notes on the leadership contest from our political portal D'Arcy McGee.

Items of interest from the Skeena Riding can be explored on our Skeena Archive page.
Posted by . at 2:09 PM

Email ThisBlogThis!Share to TwitterShare to FacebookShare to Pinterest
Labels: De Jong to tour Skeena ridding in support of BC Liberal leadership quest