UBCM seeks larger discussion on campaign finance reform; but the taxpayers can keep their cash

The large volume of UBCM resolutions have started to be attended to by delegates to this weeks Vancouver convention, with Wednesday the first day of the three days put aside for consideration of the 203 page book of Resolutions.

Earlier this week, we outlined some of the Northwest initiatives brought to the convention and the bulk of those it would seem will be reviewed and discussed through the day today.

Yesterday, the municipal leaders followed up on a theme introduced by the provincial government last week, that of campaign finance reforms. 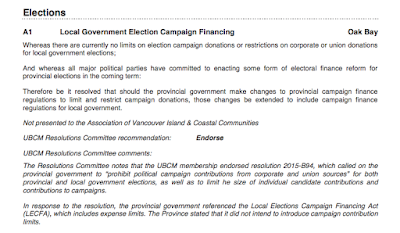 However, by the time the resolution got to the voting stage it came with one significant diversion from the provincial plan proposed by the NDP government of John Horgan and his helpful assistant Green Leader Andrew Weaver.

Perhaps aware that their residents can quickly seek access to municipal officials, they chose not to embrace the NDP/Green proposal to reach into the taxpayers wallets to fund election campaigns in the future.

As we outlined at the time of the introduction of the provincial proposal, the NDP/Green initiative includes a financing plan which will see the provincial party candidates receive $2.50 per vote from the taxpayers.

That campaign finance program is scheduled to last for a period of four years, when the initiative will be reviewed.

That kind of reach into the pockets of taxpayers, apparently is just an area that many of the municipal leaders aren't' inclined to travel towards.

Though don't expect any quick action on the larger theme of municipal campaign financing.

Much to the disappointment of a number of the delegates (mostly from the larger communities) the resolution failed to gain enough votes to pass and was put aside for further study by the UBCM executive.

Some notes on those discussions and what may come next can be found below:

More notes on the events of the UBCM convention can be reviewed on our archive page.

Update: The finance reform resolution gained a second life on Thursday, with delegates bringing it back for a second look and a more successful outcome, though one with few actual details as to what the municipal leaders hope to see in any final regulations.