With the 2017-18 hockey and skating season now upon us, the City's recent upgrade to the Civic Centre facilities has gained a bit of attention, particularly for those that have made use of the rink in recent weeks.

Sharing in the observations of the arena's new look was Prince Rupert Mayor Lee Brain, who on Friday took to his Facebook page to share some of the highlights of that project now that it's complete and to offer up his salute to the "hard working recreation complex staff who oversaw this project"

Among the notes from the arena upgrade, Mayor Brain took note of the introduction of new high efficient LED lighting and the low emission ceiling that was installed, the lights brighter and producing less heat, while the new ceiling will offer improvements on heat loss, deliver lower operating costs and improve the city's environmental footprint.

As well, the installation of a de-humidifier should serve to assist in keeping condensation to a minimum.

Beyond those improvements, some new features for those that attend events at the Jim Ciccone Civic Centre will be noticed, with Mayor Brain putting the upgrades into the washroom area for the spotlight.

Council approved the renovation project previously, with the final cost for the project stated to be at 335,000 dollars. 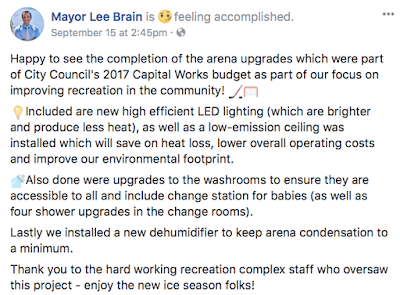 The arena project went to bid back back in January of this year, part of a larger call for bids for a number of jobs to take place at the Civic Centre this year.

You can review how the City approached their plans for renovations here.

Other notes from the Recreation Centre show that the city continues to look for a replacement for the former Director of Recreation and Community Services, Willa Thorpe departed her post in mid-August destined for new duties in Port Alberni.

Heading towards the end of September, a quick glance at the City's Job Opportunities page shows that the position is still listed as accepting applications and one that will remain open until filled.

More notes of items related to Prince Rupert city Council can be found on our archive page.