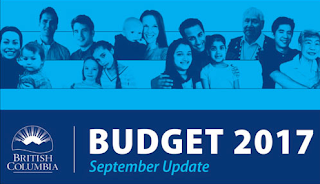 Following up on some campaign promises of the spring, on Monday Finance Minister Carole James delivered her financial bridge to the legislature. A document designed to take the new NDP government towards is larger review on the provinces finances that will come as part of the February budget process.


While many of her talking points will be revised significantly as the government heads towards that February budget, there was some funding put in place on Monday that will have a more immediate effect for residents of the province.

For her September update, Ms. James increased spending in a some high profile areas, with Housing, Education and Health gaining some increased funding for a range of initiatives through this fall and winter.

On the theme of Housing, the BC NDP outlined a few initiatives: $208 million is to be put forward for the construction of over 1,700 new units of affordable rental housing; $291 million to support construction of 2,000 modular housing units for people who are homeless and more than $170 million over three years to provide 24.7 staffing and support services.

$7 million was put in place over three years to fund the Residential Tenancy Branch  to ensure that renters are treated fairly in the province and that the rights and responsibilities of both renters and landlords are clearly understood.

The Finance Minister reinforced the NDP path forward for the Health system, a least when it comes to User fees, with a 50 percent cut in MSP premiums announced for all British Columbians, with Ms. James calling it a first step toward the elimination of all premiums over the next four years.

Funding for mental health and the growing crisis related to Fentanyl and opioids was also outlined as part of the financial update. 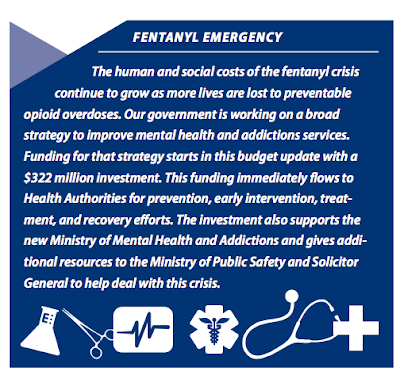 As well, $472 million has been earmarked to provide for an increase of $100 per month for both income and disability assistance.

On Education, in addition to reaffirming the NDP governments commitment on Free Basic Adult Education and English language training, the Finance Minister announced a $681 million increase for the province's K to Grade 12 system over three years. 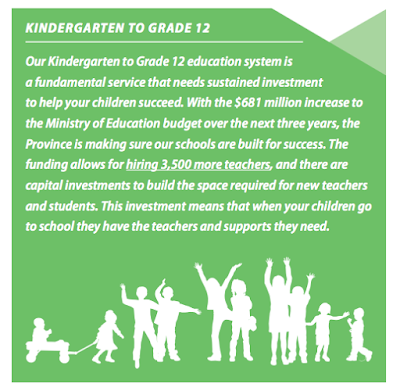 Included in that funding was a commitment for improving classroom supports for children for up to 3,500 new teaching positions, assistance for enrolment growth and pressures as well as $50 million in capital funding to provide the resources needed to help all children succeed.

Aware that circumstances can change, the NDP government did identify some areas which may put their September Update numbers out of whack over the months ahead, something which may have an impact on how the more expansive February document comes together. 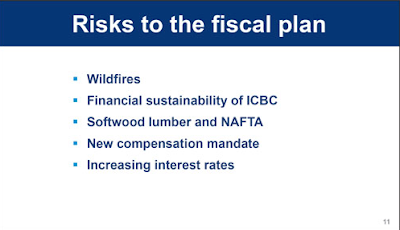 As part of her presentation, the Finance Minister also noted that the short timeline between taking power and crafting the update meant that some of the NDP's high profile campaign promises will have to wait just a bit longer to be fully constructed.

One of those highly touted issues of the spring campaign, was that of Child Care initiatives, with the  details related to the NDP's day care program on hold until at least the February Budget, with the government requiring more time to put together that ambitious plan from the campaign platform.

The same goes for Renter's anticipating some progress on the Renter's rebate promise of the Spring, that too will have to wait until the New Year as the Finance Minister reviews her options.

On education, while the NDP did add to the financial stream to the school system, and include a commitment towards infrastructure spending over three years, there was no indication on Monday of any large scale plan to build new schools in the short term.

That would appear to put a bit of delay towards getting some shovels in the ground on something which had been an important part of the narrative of the Spring election. 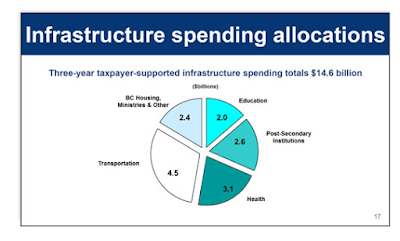 When it comes to generating revenues, the government is introducing a personal income tax of 16.8 percent on taxable income over $150,000 marking a 2.1 percent jump from previous rates, as well Ms. James noted that the corporate income tax rate would increase to 12 percent up from its current level of 11 percent.

For those looking for the bottom line numbers the four key elements of the 2017-18 Budget as outlined by the Finance Minister look as follows:


The Government was quick to get out its talking points on the Budget Update, offering up a range of material for British Columbians to review

Prior to the Budget Speech in the Legislature, the Finance Minister took reporters through the range of material that was part of Monday's Financial Update, you can review her presentation below:

The budget made for a busy work day for the province's political reporters, commentators and pundits the scope of some of their work can be reviewed below:

You can review more items of interest on Northwest issues from our Legislature archive page here.

A wider overview of the BC political scene is available as part of our companion blog D'Arcy McGee.
Posted by . at 8:52 AM