Congestion at Fairview Terminal in Prince Rupert has given a second container line cause to redirect traffic away from the North Coast gateway on a temporary basis, with Maersk Container Shipping Company announcing that it too will be diverging some of its cargpo to DP' World's Centerm facility at the Port of Vancouver for a short period of time.

The decision to shift cargo by the Danish based shipping giant follows a similar announcement from the Chinese line COSCO which announced its diversion plans earlier this week.

In a notice to its customers, Maersk stated that as the dwell times have grown to seven days in Prince Rupert they will look to lessen that congestion with the change to their rotation schedule for up to 4 weeks, with plans to advise customers when they will return to their normal schedule of rotation for Prince Rupert.

The nature of that rotation change is that their vessels will now call on Vancouver first before transit to Prince Rupert.

While the vessels will continue to call on Fairview, the container line will be off loading less cargo in Prince Rupert while the current dwell time situation remains as it is.

According to the Marine Operations listings provided by the Port of Prince Rupert, the Maersk vessel Puelo is currently listed as having arrived at Prince Rupert harbour.

The next scheduled port call by Maersk is scheduled for September 29th, when the arrival of the container vessel Maersk Kokura had been listed as pending at Fairview. 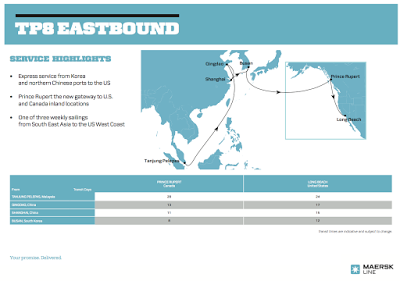 Maersk which introduced its current service to the Port of Prince Rupert in 2015 operates a run known as the Maple Service, transiting goods between Busan, Shanghai and Yantian to Prince Rupert's container terminal.

The reports on Maersk's decision have been relayed through a number of trade publications dedicated towards the cargo shipping industry and come after the shipping line issued a notice for customers earlier this week.

In an article in the Journal of Commerce the recent increase in transit through the port was being attributed to ongoing construction work related to the recent expansion of the terminal facility.

More background on the latest estimated dwell times related to the congestion issues at Fairview is expected to be released next week, as port operators DP World look to address the ongoing concerns from their customers.

More notes on Fairview Terminals can be found from our archive page.
Posted by . at 8:37 AM