Range of themes on Agenda as municipal leaders gather in Vancouver 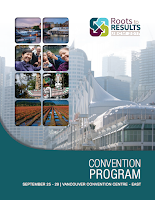 The UBCM Convention for 2017 got underway earlier today, the morning session launching four full days of political discussion, workshops and networking, with a fifth half day on Friday set to feature the first address to municipal leaders from Premier John Horgan, who will bring an indication as to how the new NDP government may approach municipal affairs.

The theme for the convention this year is Roots to Results and as the delegates dig into the four days of activities dedicated towards municipal concerns and issues of engagement with provincial and federal levels of government.

The morning session for today focused on a topic that indeed will impact all three levels of government with much of the first hours of the convention given over to the introduction by the provincial government as to how they plan to approach the issue cannabis legalization.

The roll out of the Provincial government's notes on the topic from Solicitor General Mike Farnworth can be reviewed here.

With the province launching a public engagement process for their regulation plans, you can learn more about that initiative and participate in it here.

Other areas of discussion for the day included advancing the relations between Local Government and First Nations, Green innovations and environmental policy initiatives.

The BC Mayors' Caucus also planned to hold their first conversations of the week long event.

Tonight is turned over to socializing and networking, with meet and greets as well as a film screening of the feature Us and Them.

Tuesday brings a full day of work for the delegates

Topics of Zero Waste in BC, preparing for the 2018 General Elections  and Building regulations are a few of the morning themes, while the afternoon will feature the Small, Mid Size and Large Communities luncheons, as well as a discussion on some of the emergency management issues that the province had this year with floods and fires.

The Federation of Canadian Municipalities President will also address the convention with a speech set for 2:45 PM.

A number of provincial policy sessions bring the day to a close with themes of Non-medical Cannabis, New approaches to the Overdose crisis, an update on the Canada-US Lumber dispute and a review of the Water Sustainability Act part of the hour and half time block.

Financial officials from the municipalities will have a number of events to attend to as well, featuring an overview of Municipal Insurance issues as well as the Semi-Annual Meeting of the Municipal Finance Authority.

Wednesday finds the delegates moving into some of the key elements of the convention with a review of the Annual Report for the UBCM, a Question and Answer Period and Appointment of Committees just a few of the many items to be addressed.

The Keynote Address for the Convention comes at 9:25 AM when former CBC reporter Terry Milewski explores a number of themes during the course of a one hour presentation.

The 2017 UBCM Trade Show officially opens at 10:30 on Wednesday, offering civic leaders and their staff an opportunity to explore some of the newest ideas and equipment related to municipal concerns.

The Noon hour on Wednesday is handed over to the Regional Association Lunches, with the Northwest delegates set to gather with the North Central Local Government Association members for a ninety minute review of their key issues.

Selina Robinson, the Minister of Municipal Affairs and Housing is the featured speaker in the mid afternoon, with many municipal leaders anxious to hear how much attendance the NDP government will direct towards municipal issues.

Provincial Cabinet Town Halls follow from 3 to 4:15 PM with areas of Health and Safety, Infrastructure, Economic development, Jobs, Resources and Green initiatives all part of the agenda.

The presentation of the 2017 Energy and Climate Action Awards will also be a highlight of the Wednesday sessions, with the recognition to leadership on the theme set for 4:15PM

Receptions rule the evening with both a BC Government reception, a reception hosted by CUPE, and one hosted by the Consulate-General of the People's Republic of China all on the list of events for the night.

Thursday brings the final full day of workshops and information forums for the delegates.

Municipal infrastructure, making BC's regional airports successful and socially responsible investing all make for some early morning events, while the delegates get to work on the resolutions portion of the convention.

The interim leader of the Opposition Liberals gets his opportunity to address the conference, with Rich Coleman scheduled to share the party's thoughts at 8:35 AM

As the noon hour approaches the delegates will review the nominations for UBCM executive positions and hear any speeches as required.

Afternoon workshops will review the current state of the BC LNG industry, Forestry issues, Affordable housing concerns as well as Flood Mitigation initiatives. Delegates will also have opportunity to learn more about themes of Transgender inclusion.

Elections of Remaining Executive Positions winds down the afternoon, leading up to the UBCM Reception at 6:30 and the Annual UBCM Banquet and Award Presentations at 7:30PM

Friday is wrap up day for the five day event, with the final bit of resolution work attended to as well as a pair of high profile speeches.

The Federal address will bring Cabinet representation to the convention, while the final event of the 2017 UBCM convention will be the annual address from the Premier.

With Premier John Horgan making his first appearance at the convention as the leader of the new NDP British Columbia government. His comments and how he reviews the many issues of shared interest will give many of the municipal leaders some indication as to what the landscape of engagement may be like as the government moves further along with its policies over the next few months.

You can review the Full Agenda for UBCM 2017 here.

So far Councillor Blair Mirau has been the more active of the two when it comes to sharing updates on what City Council is up to at the UBCM. You can review their entries below:

On Friday, we made note of some of the themes that the Prince Rupert delegation were planning to explore at this years convention, that overview is available here.

Tomorrow we'll put some focus on the diverse nature of the resolutions that some of the communities attending UBCM have brought along to be considered.

Our notes for Tuesday will also explore what the Northwest municipal leaders have tagged as the important items for them to be considered by the convention.

You can find the latest updates on developments from the convention, from our UBCM Archive page here.
Posted by . at 2:55 PM

Email ThisBlogThis!Share to TwitterShare to FacebookShare to Pinterest
Labels: UBCM Agenda for 2017