A declaration issued yesterday by the Hereditary Chiefs of Lax Kw'alaams takes aim at the lack of consultation with them by the Federal Liberals and their plans for an Oil Tanker Moratorium and the establishment of the Great Bear Rain forest.

As well, the information release puts some additional focus towards their past observations related to a proposed oil pipeline project that would transit the province into their traditional territory.

We release this declaration today out of frustration with governments who have not consulted with us in relation to the establishment of the Great Bear Rainforest or the proposed Oil Tanker Moratorium Act—which will have significant impacts on our members ability to eke out a living and precludes our leadership from selecting balanced holistic options in the productive use of their traditional territories.

As Indigenous peoples, we want to preserve the right to determine the types of activities that take place in our territories and do not accept that the government should tell us how to preserve, protect, and work within our traditional territories.

As the most responsible environmental stewards for millennia, we categorically reject interference of outside environmental NGOs (especially those foreign-based) who appear to be dictating government policy in our traditional territory.

In the full text of the declaration (see below) the Hereditary Chiefs also call attention to their history as well as toward their rights and title to their traditional territories.

They also make note of their opposition to what they describe as American environmental NGO's who dictate government policy.

In addition to their concerns over outside influences on government policy, as they have often in the past, the Hereditary Chiefs make mention of a high profile energy project that has been proposed for the region and how they believe it may serve their people.

We have and will always, put the protection of the environment first, but this must be holistically balanced with community, social, employment, business and other priorities;

We absolutely do not support big American environmental NGO’s (who make their money from opposing natural resource projects) dictating government policy and resource developments within our traditional territories;

When such projects are environmentally acceptable and essential to meeting our non-environmental needs (such as the Eagle Spirit Energy Pipeline project) such foreign interference serves only to perpetuate the rampant poverty and dysfunction encouraged by previous colonial policies; 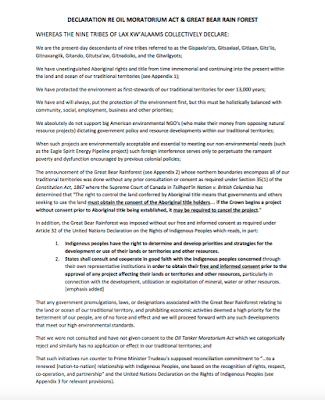 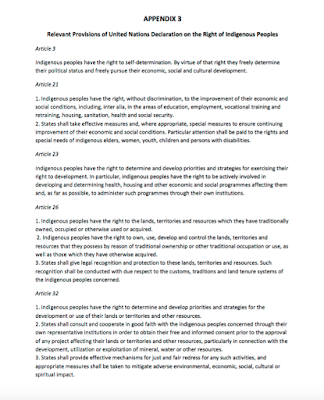 It's not the first time that the The Hereditary Chiefs of Lax Kw'alaams have issued a statement related to the Federal Liberal plans for an Oil Tanker moratorium, earlier this year they expressed some of their concern towards the Federal Tanker Ban Legislation  making many of the same points related to lack of consultation at the time.

Both the statement from May and this most recent one of yesterday, also call attention to the Liberals support for United Nations declaration on the Rights of Indigenous Peoples.

The timing for the statement of yesterday and its focus on the UN declaration is interesting, coming as it did prior to the Prime Minister's address on Indigenous engagement scheduled for the United Nations today.

The reference to balance holistic options and mention of the Eagle Spirit Energy project from their information background piece seems to be a nod towards resource development that has been proposed for their territory.

The Eagle Energy initiative is one that the Hereditary chiefs have previously issued statements on, offering up their support of the oil pipeline project proposed by energy proponent.

That industrial development which is backed by the Aquilini Development and Construction company would see a 1,600 kilometre pipeline network cross over First Nation territories with a shipment terminal to be developed near Lax Kw'alaams.

It was estimated that the facility would ship up to one million barrels of oil per day from the terminal site.

Eagle Spirit Energy has not outlined much background of late towards their pipeline proposal, though they did expand on the level of support from Hereditary chiefs across BC and Alberta back in September of 2015.

At the time, the elected Council at Lax Kw'alaams led by then Mayor Gary Reece observed that for any such project to move forward, the approval of the entire community would be required.

The most recently elected Council for Lax Kw'alaams, which now has Mayor John Helin at the helm has yet to offer up any indication as to how they view the pipeline and terminal proposal.

Mayor Helin is the brother of Calvin Helin, the latter has been one of the proponents for the Eagle Spirit initiative and earlier this decade was listed as a registered lobbyist for Eagle Spirit Holdings.

More background on the proposed Eagle Spirit energy project can be found here.

An overview of items from Lax Kw'alaams is available here.