Prince Rupert's Lester Centre has seen some high quality comedy over the years, whether it was the touring show of the Royal Canadian Air Farce and Brett Butt, to local productions from the thriving local theatre community.

This Sunday night, Rupert can add one more name to the list of funny men and women, as Canadian Comic legend Mike MacDonald takes to the stage, part of the Big Dog Comedy tour stop on the North Coast.

From network television shows, to his own specials MacDonald's comedy has been providing a Canadian view on comedy for audiences world wide through the decades.

MacDonald is back on the comedy tour scene after having had some medical issues earlier this decade, including the need for a liver transplant in 2013.

He returned to the comedy scene full time in 2014.

A snippet of his work from the past can be found below:


Also taking to the Lester Stage is Travis Watters who has his own interesting back story, having been a professional wrestler for 18 years, which would suggest that you warm up your laugh chords, lest he think of reviewing some past career themes on Sunday at the Lester. 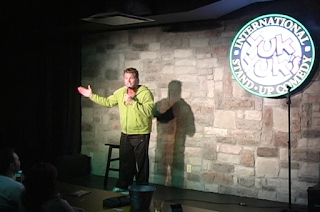 Learn a bit more about his path through the comedy universe here.

Tom Basset is the tour master and host for the night of comedy, he regularly brings the laughs to the North Coast with a number of high profile artists having come through town over the years.

Tickets for Sunday's show are going for 20 dollars and are available at the Lester Centre of the Arts.

More notes on Community events can be found on our archive page.
Posted by . at 5:10 PM