Be It Resolved ... Northern BC municipalities bring the discussion topics for UBCM

While much of the UBCM gathering is spent on networking, workshop attendance, one on one sessions with Provincial ministries and meet and greets each evening, a key element of every convention is the presentation an discussion of Resolutions.

This year, Northern British Columbia communities and organizations west of Prince George have sponsored sixteen    resolutions and seen their proposals make it to the 2017 Resolutions Book.

Vanderhoof puts most of its focus on transportation issues, with thoughts on the need for better information sharing between CN and the communities along the northern main line to Prince Rupert. They are also calling for railways to discontinue he use of whistles in communities, a sustainable delivery of public transportation system, improvements to regional highways across Northern BC. A resolution on Brownfield classification is also offered up for consideration.

The Bulkley Valley communities combine to bring two resolutions to UBCM, with Telkwa looking for a new approach on how to use federal gas tax funds and the Regional District seeking a change to the unconditional grant process to alleviate cash flow hardships.

Terrace delivers two resolutions the convention both health related, the first looks for some changes to the current formula for infrastructure funding with a focus on Regional Hospital planning, while the other resolution explores areas related to Helicopter Emergency Medical Services.

Health is on the mind of Burns Lake officials with a resolution seeking additional funding for nurse practitioners in the province.

Protecting the Marine environment will be the focus of an initiative from the Islands Trust, which seeks government action on polystyrene Foam Pollution.

And the North Coast Regional District also tackles a health concern, with a call for the BC Ambulance Service to amend its dispatch model in order to provide a better response to emergencies.

If the twin municipal governments on the North Coast had any resolutions up for consideration they don't appear to have made the final cut, with no items listed in the resolutions book set to be introduced by either Prince Rupert or Port Edward.

Some notes related to those resolutions that will be considered can be found below:
(click on each Resolution to expand the document)

The community just west of Prince George appears to have done the most work when it comes to preparation for the convention, with Five resolutions up for review, they include:

Three resolutions are in the book for this year  from both the Municipal and Regional District Level: 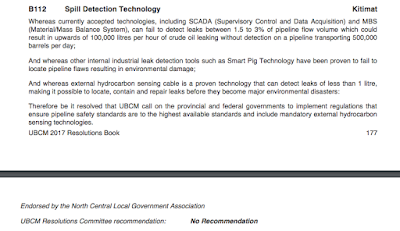 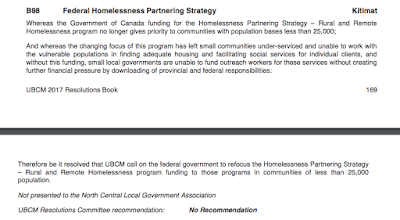 Two resolutions are up for review, one from Telkwa and the other from Regional District offer up some themes from the Bulkley Valley:

Terrace City Council puts the focus on health with two for the resolution book for 2017:

Officials in the Lakes District found one of their resolutions also making its way to the 2017 convention:

Ambulance Services are on the mind for the North Coast Regional District which has one resolution as well up for review this week:

Coastal protection related to protecting the marine environment will be introduced by the Islands Trust.

You can review the process ahead for the municipal leaders and examine the full listings from the 2017 UBCM Resolution Book here.

The resolutions will be introduced to the convention attendees through the final three days of the conference.

More background on the convention can be found on our UBCM Talking Points archive page.
Posted by . at 8:56 AM

Email ThisBlogThis!Share to TwitterShare to FacebookShare to Pinterest
Labels: Northwest resolutions for UBCM 2017