Council to meet in Special Session this afternoon

City Council members will be back to work in Council chambers this afternoon, having called a Special Regular Session for 5:15 PM.

According to the Agenda posted to the City website among the items for discussion will be a verbal report from City Manager Robert Long, the topic related to the expropriation of lands for redevelopment of Watson Island 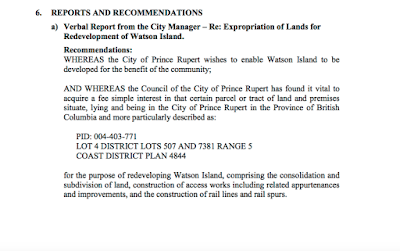 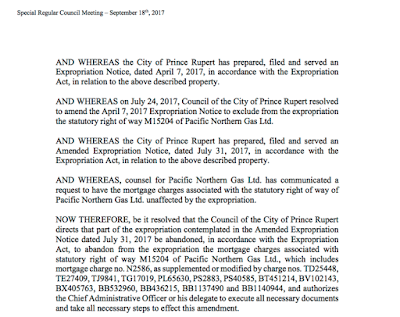 Since they are going to be in Chambers anyways, they have also added another Closed Council Session to the list, with a short gathering scheduled for 5 PM prior to the Special Regular Session, that session will exclude the public. 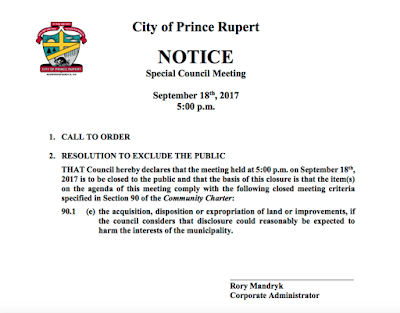 Regular Council session proceedings are normally streamed through the City's video portal from the City of Prince Rupert website, or broadcast by CityWest's community channel.

Should they remember to turn on the switch tonight, those proceedings would start somewhere around 5:15PM

Update: Council dispensed with the work at hand in less than four minutes on Monday evening, receiving the report from the City Manager on the Watson Island expropriation plans.

For his contribution to the evening the City Manager Robert Long explained the background to a request from Pacific Northern Gas that the City drop the expropriation on the mortgage held by Pacific Northern Gas, with Mr. Long calling the process for the city a technicality.

The full discussion on the topic can be reviewed below: