After their party had spent sixteen years wandering in the opposition wilderness, John Horgan's 2017 collection of NDP government members certainly had opportunity to make like Santa and check their lists twice, if not more, as they took hold of the levers of power in British Columbia.

On Friday, the path forward for the new NDP government was delivered by Lieutenant-Governor Judith Guichon, who outlined the aggressive agenda for the members now sitting on the government side of the House, delivering an address that mined almost two decades worth of campaign promises.

As the speech was presented to the Legislature Friday afternoon it became very clear early on, that the NDP had suggested that they will approach governance significantly different than how they saw the sixteen years of legislation and policies as delivered by the Liberals.

Friday's Speech from the Throne travelled any number of familiar themes of elections past and delivered the narrative of change that the NDP wishes to make prevalent,.

That foundation for change was delivered by one paragraph in the early minutes of the 22 minute address, a short overview that explored the path pursued in the past and how the NDP plan a different look for the period ahead.

"The problems facing people today, are the result of past choices. Choices that resulted in: a generation of student learning in overcrowded classrooms, out of control housing prices, growing waits for services like health care and the rise of part time, low paying jobs.

Premier John Horgan touched on those themes in comments following the speech, expanding on the approach the NDP plan to take.

“That’s why it’s important that we put the right framework in place.

Much of our work this session will focus on legislation that transforms government – getting big money out of politics, clamping down on lobbyists, and making sure the vote of every British Columbian counts.”

“We’re looking at a new way of doing politics that puts people first. To deliver for people, you have to listen to people – and make decisions where everyone benefits ... That’s why it’s important that we put the right framework in place.

Some of those themes were clearly aimed towards their current partners in the Legislature,  with a pair of agenda items that made for much of the Green Party call to action of the spring election campaign.

While the lengthy list of initiatives culled from many NDP policy platforms of the past will take a bit of time fully develop. It's a to do list which could very well require at least one term if not more in office,  should they manage to hold onto to their government perch for the full electoral term ahead of four and a half years (that with a shift from spring elections to a fall date with the polls).

Friday's Speech did identify three priority areas where Mr. Horgan and his cabinet will look to deliver some quick results.

Affordability was one key theme, with NDP outlining plans to make housing more affordable, establish a fair wages commission to deliver a 15 dollar an hour minimum wage and to fix what they call significant problems with ICBC and BC Hydro, while holding down the costs for British Columbians.

Improving Services was another area where the NDP plans to take some action on. Among their goals for that agenda is to restore proper funding for the schools of British Columbia, promote and protect quality health care in the province and improve the transportation supports for people with disabilities, as well as to work with the Federal Government and communities across BC to develop new transit and transportation projects.

Building a Sustainable economy was the third section of the Throne speech where the NDP hopes to see some fast results, looking to sustainably support traditional industries such as forestry, mining agriculture, aquaculture and natural gas development.

As well the NDP continued on with their theme of the election campaign to make BC a world leader in engineered wood products and value added resources. Capital investment is another area to watch for in the short term, with the NDP set to build new schools and hospitals, as well as roads and other infrastructure projects, all of which they suggest will create well paying jobs throughout the province.

In addition to their Legislative plans, Premier Horgan has offered up that the province is at a critical and unique moment in its history, looking to create a new partnership with First Nations and all Indigenous communities. Towards that goal, the Premier noted that his government will embrace the United Nations Declaration of the Rights of Indigenous Peoples.

“This is a foundation for progress that has not been seen before in this province,” Premier Horgan said. “We will build on this foundation with renewed energy, hope and optimism to deliver a government that works for all British Columbians.”

Other issues that the government is to address attention towards, include Health concerns related to the ongoing Opioid and Fentanyl crisis, as well as to areas of poverty reduction, childcare and natural resources.

They also have plans to introduce reforms to campaign financing and how donations can be collected, as well as to set the terms for a referendum on proportional representation which is to take place no later than November of 2018.

As part of the roll out for the Throne Speech, the Government provided an infographic to highlight those themes

For the most part Friday's speech counselled patience for British Columbians, with many of the NDP initiatives on a timeline that will take months, if not years to show results on.

That however is the long range plan. For the short term and what comes next after the Speech from the Throne, we turn things over to North Coast MLA Jennifer Rice.

Ms. Rice took to her Facebook page to provide the Cole's Notes Civic's lesson of what's ahead for the next week or so in Victoria. 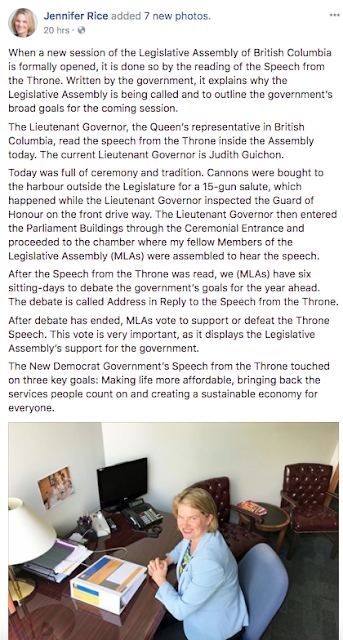 You can review the NDP governments talking points on the Throne speech here.

The video presentation from the Lieutenant Governor can be viewed below:


Some reviews of the blue print as to how the NDP see the road forward can be found below:

As the new session of the Legislature gets underway, you can find notes of interest for both the North Coast and Skeena riding's from our archive pages below:

For a wider overview of political developments both in Ottawa and Victoria see our political portal D'Arcy McGee.
Posted by . at 1:13 PM

Email ThisBlogThis!Share to TwitterShare to FacebookShare to Pinterest
Labels: NDP Speech from the Throne September 2017