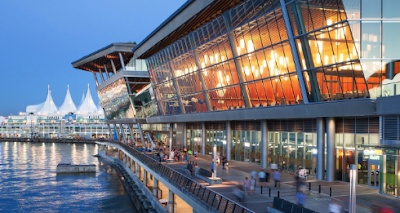 The iconic Vancouver location is the backdrop for both the conference and accompanying trade show that make for the five days of political networking that many civic leaders take part in, whether amongst themselves, or with the large collection of BC cabinet ministers and officials that set up shop during convention week.

Today's first day of events offered the delegates an early morning study tour on agriculture in the province, as well as day long session on financing Reconciliation,  which was to foster a quest towards inclusive governance in British Columbia.

Another study tour offered delegates a chance to learn more about efforts to disrupt money laundering in the province.

The afternoon features the BC Mayor's Caucus where all of the provinces top elected officials prepare to chart their path through the days ahead.

Tuesday provides for sessions on Developing Municipal agreements on health care, working towards Earthquake study and awareness and a session on BC's energy future.

The first of keynote addresses arrives tomorrow with the President of the Federation of Canadian Municipalities set to speak to shared interests wth UBCM.

The afternoon brings sessions on Ride Hailing, a Connected province, the challenges of Forestry and Tourism issues.

One session that the City of Prince Rupert may take a pass on is the Forum on the Best practices towards remuneration for elected officials.

With City Council having taken that challenging issue off their to do list earlier this year after receiving a report from the Mayor's select committee on remuneration.

Wednesday brings some of the heavy hitters to the microphone with a pair of addresses.

The first one is the Keynote address of the week from former CBC anchor Peter Mansbridge in the morning; while Selina Robinson the Minister of Municipal Affairs and Housing will be speaking at the Wednesday afternoon session.

Also speaking in the afternoon will Dr. Andrew Weaver the leader of the Green Party in the BC
Legislature.

Some of the mechanics of the convention get reviewed on Wednesday as the delegates review the first report of the nominating committee review the Principal Policy session resolutions.

The first of the Cabinet Town Halls get underway Wednesday as well, with a number of themes to be explored between provincial and municipal officials through the day.


In the evening there are two receptions to attend the first the BC Government reception from 5 to 6:30 PM, the annual gathering makes for a chance for discussions on themes in a less formal setting.

The second of the receptions may be a somewhat more controversial one, with the Chinese government set to host their annual reception for UBCM.

A number of communities have already indicated that they plan to boycott that reception and there have been calls for the practice to be discontinued following this convention year.

That in response to the Chinese having imprisoned two Canadians with questionable accusations; all of it clearly related to the detention of Huawei executive Meng  Wanzhou in Canada at the request of the US government.

In addition to the anger over the Canadian arrests, some of the delegates have questioned if a foreign government should have such a large presence at the UBCM gathering.

To this point it is not known if the City of Prince Rupert, or other governments around the Northwest have plans to take the Chinese government up on their invitation and will be in attendance at the Wednesday event.

Workshops and Clinics are spread out through the day on Thursday, as delegates take in a number of sessions on innovation, housing and Child Care to name a few.

More nomination work and then elections of officials makes for the Thursday schedule.

Delegates will also take in an address from the Leader of the Opposition Andrew Wilkinson who speaks to the gathering early on Thursday morning.

The majority of the evening is then turned over to the annual UBCM Reception and Banquet.


Friday's final day will see the delegates wrap up their elections for Executive positions, as well as to finish off their overview of the many resolutions up for adoption and action by the UBCM membership.

The Convention comes to an end with the traditional Address by the Premier, with John Horgan set to send the delegates back to their home communities with an 11 AM address.

You can dig a little deeper into the Agenda for the week here.

The UBCM convention program can be reviewed here, while the Trade Show component of the week is featured here.

See our archive page here, for a look at some of the talking points that the delegates have brought to the event and updates on how the convention goes through the week.

You can also find some of the themes of the week from the UBCM twitter feed of #UBCM2019.

More items of interest about the work of Prince Rupert City Council can be found from our archive page.
Posted by . at 3:18 PM