As the worst of the weekend's weather arrived on the North Coast a small group of homeless residents and their supporters made their return to the City Hall Fountain area.

Once again in place to call attention to the need for housing. With an ongoing dispute over the conditions in place for those looking to access the Third Avenue West shelter, making for the background to the new protest over a lack of housing.

The return of the tents, comes as the North Coast prepares to head into the fall and winter storm period and highlights that despite some progress in providing for shelter for those in the most need, there is still much work to be done by the provincial government on the issue.

In March of this year, City officials and MLA Jennifer Rice celebrated the opening of the Crow's Nest, the 36 unit supportive housing complex which offers supports for those in need.

Though as noted at the time, that number of available housing units was a reduced amount rom the original design and from that, the once considered temporary shelter on Third has seemingly become a permanent shelter.

We made note of the percolating issue on housing in August, when word first began to circulate of a number of concerns over access to housing for some in the community.

Exacerbating the issue, over the summer, a number of the homeless camps found in public spaces such as Moresby Park and under the Second Avenue Bridge were removed by city works crews.

For some the option of taking a bed at the Third Avenue Shelter was apparently denied, that after disputes with those that have been asked to operate the facility which is funded by the North Cost Transition Society of Prince Rupert.

In August NCTS called attention to the growing homeless population and the need for Prince Rupert to remain a community of acceptance and support for everyone. 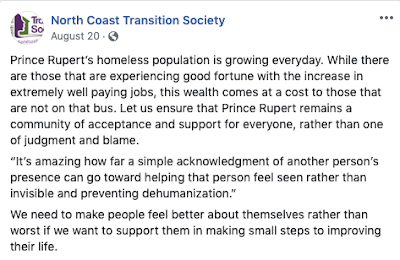 However, on Friday night, Shelter Now Prince Rupert, the local group that has been advocating for the homeless since the first Tent City protest of 2017 chose a more visible approach towards getting the issue out to the public.

Through signs at the City Hall fountain and by way of Social Media they recounted some of the concerns over the conditions in place and the fate of those that aren't allowed to stay at the Third West shelter, highlighting the need to find ways to protect those that are the most vulnerable in the community.

Those staging their protest and those supporting them may have to wait for a reply however, as there are few left around City Hall this week to respond to their concerns.

That as Mayor Brain, City Council members and Senior City Staff are all to be found in Vancouver for the five day UBCM conference at the Vancouver Convention Centre.

At that session, they may have opportunity to speak with a range of provincial cabinet ministers, so the theme of the need for a larger social housing foundation for Prince Rupert might be a topic that makes for some conversations at the annual event.

As for comments related to the new Tent City at City Hall, so far the City has not made mention of it through any of their information options of the civic website or Facebook.

Likewise, neither Mayor Brain or MLA Jennifer Rice, both active social media message makers have spoken to the situation to this point.

For more on the past issues of housing on the North Coast see our archive page here.
Posted by . at 9:45 AM