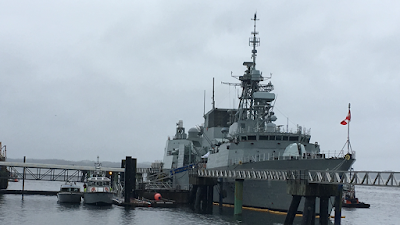 Like many a visitor, the crew from the HMCS Calgary took a few photos and videos of their recent stopover in Prince Rupert. The Royal Canadian Navy Frigate was in port last weekend serving as the host venue for Lieutenant Governor Janet Austin's tour of the North Coast and Haida Gwaii.

The focus for the Prince Rupert photo shoot was the new Mascot for the ship, which made a few guest appearances around the city last Friday and Saturday. 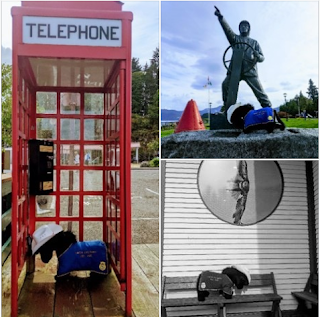 As part of their social media release the ships' company is also looking for suggestions for a name for the mascot, which you can submit through their Facebook page.

In addition to the photos, HMCS Calgary has also shared a time lapse video of their departure from the Northland Terminal on Saturday evening, with the ship transiting through Prince Rupert Harbour on her way to Haida Gwaii.

Some notes on the ships visit to the city last week can be found below.

Arrivals and Departures a plenty for Cow Bay Dock area over weekend
Cow Bay Waterfront the place to be Saturday! As Tea Party takes place on HMCS Calgary, along with an unscheduled visit from the Cruise Ship Island Princess
Her Majesty's Canadian Ship Calgary stands ready for Her Majesty's British Columbia Representative